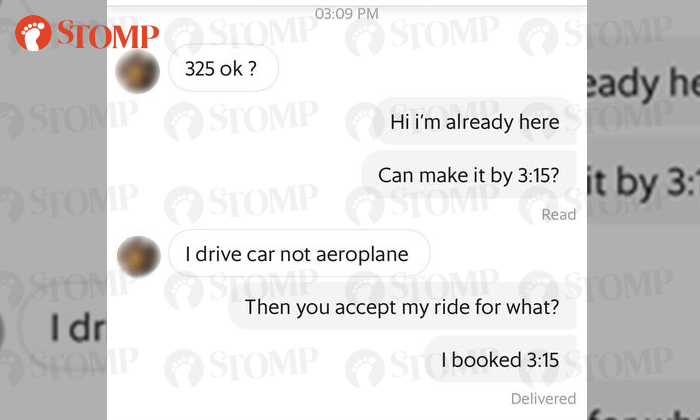 Punctuality seems like a simple thing to ask... but is it?

Stomper Nelson booked a GrabHitch ride in Choa Chu Kang on Friday afternoon (April 2), but ended up going through an unpleasant experience with the driver.

As GrabHitch rides have to be scheduled at least 10 minutes in advance, Nelson booked his ride for 3.15pm.

However, the driver sent a message asking if Nelson would be okay with him arriving at 3.25pm

As Nelson was already at the pick-up point, he asked if the driver if he could make it by 3.15pm.

The Stomper was shocked by the driver's reply: "I drive car not aeroplane."

He said that the driver ended up cancelling on him.

Nelson told Stomp: "Such an unpleasant encounter with this GrabHitch driver!

"It was frustrating as I was given attitude by the driver for no reason. When I get a GrabHitch ride, obviously when the booking is accepted, I am expecting to take the ride at the timing and not earlier or after.

"How can drivers say such things to their passengers? So rude."