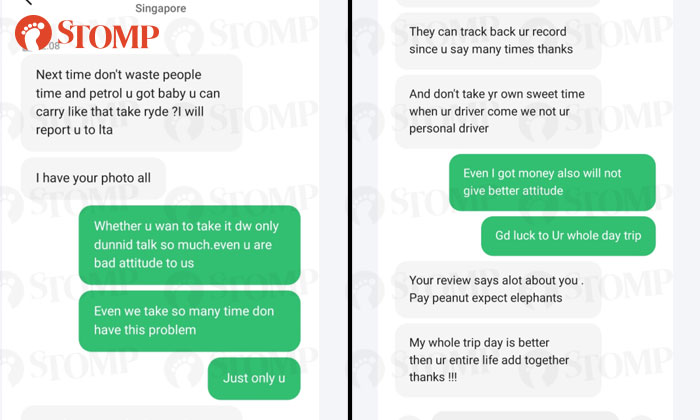 A private hire driver's rude exchange with a passenger has left a bad impression on her family.

A Stomper alerted Stomp to the incident that happened to his sister-in-law and sister when they made a booking with Ryde recently.

He said that the driver had gone to the wrong pick-up location. After his sister-in-law directed the driver to the correct pick-up point, the driver asked her to top up an additional $5 for the stroller she had with them as it was considered a 'bulky item'.

"My sister did not accept as she felt that it was unreasonable as other drivers did not charge such a fee," the Stomper said.

"After the driver left, he sent a few SMS threatening to inform the Land Transport Authority (LTA) and also made unwanted remarks when he could have just driven off."

In the texts shared by the Stomper, the driver says: "Next time don't waste people time and petrol u got baby u can carry like that take Ryde? I will report u to LTA." 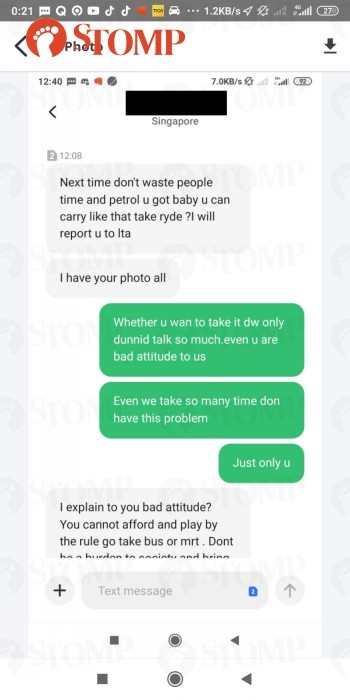 He also goes on to say the Stomper's sister has a 'bad attitude' and is a "burden to society". 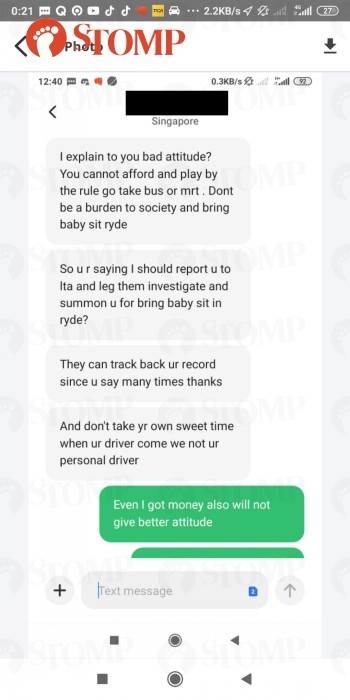 The Stomper found the exchage absurd and said: "The least I would have expected from the driver is to kindly explain to my sister and sister-in-law that he is unable to fetch them from point A to point B as there is an infant with them.

"Yes, it is illegal for private hire drivers to have a child below 1.35m as a passenger.

"However, he did not check with them if they have a child booster seat on the stroller before making that assumption.

"Another thing which I could not accept is that the driver was the one who told my sister and sister-in-law if that they are unable to pay the additional $5, they would have to cancel the ride, which they amicably did.

"However, things did not end there! He decided to take it personally to the point that he started making derogatory remarks via SMS even though HE WAS THE ONE who had initially instructed the cancellation of the trip.

"This whole thing came about because he wanted the additional $5 which my sister was reluctant to give in to his request.

"He only mentioned the LTA law right after my sister refused to heed his request and cancelled the trip."

He added that it is "ironic" the driver had a 4.98 rating on the Ryde app.

"It makes me start to question the basic service standard of private hire drivers such as him and whether they attended basic service etiquette lessons in dealing with customers in the first place."

"The very least he could do is to have the basic courtesy to apologize after that incident."

The Stomper's family has since made a complaint with Ryde regarding the driver's service.

"His actions are totally uncalled for and I hope Stomp can share this article to let the public know of such unprofessional and rude drivers."

Related Stories
Lowballer bargains with 64-year-old cabby over $7.60 fare because 'I'm old and not much money'
Gojek responds after driver allegedly kicks 3 passengers off ride for refusing to tip him
'I ride bike not submarine': Grab investigating after rider asked to deliver food to Seletar Island
More About:
private hire driver
passenger
bad service
text