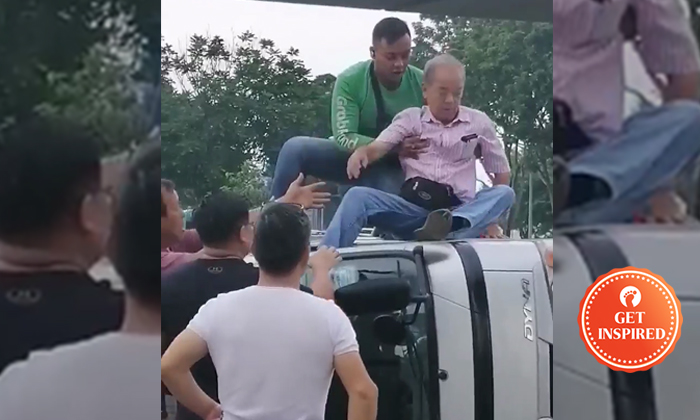 A GrabFood delivery rider has been lauded for rescuing an elderly motorist from a van that was left flipped on its side following a traffic accident on Saturday morning (Aug 10).

In response to a Stomp query, the police said they were alerted to an accident involving a lorry and a van at the junction of Jalan Boon Lay and Boon Lay Way at 10am.

The van driver was conscious when conveyed to Ng Teng Fong General Hospital.

Facebook user Ryan Hiroshi posted videos that were taken at the scene, showing the van overturned on its side.

A personal mobility device (PMD) rider from GrabFood can be seen perched on the overturned van and helping its elderly driver out from the vehicle.

Several members of the public were also there to offer assistance.

When contacted by Stomp, Ryan recounted: "Before I started filming, the heroic rider was using his own hand to try and break the van's side window so that he could free the driver.

"He wrapped his fist with a cloth and tried to break open the window, but to no avail.

"Fortunately, a construction worker at the scene passed the rider a crowbar and he managed to break the window in one blow.

"It's heartwarming to see fellow Singaporeans going all out to save a trapped elderly driver."

In his Facebook post, Ryan also commended the GrabFood deliveryman's actions and said: "Not all PMD riders are bad apples. Some are life-savers too."

Ryan told Stomp: "All these while, we've been hearing negative comments about PMD riders. But hey, there are still kind souls around.

"This incident is a good example of how one PMD rider did his best to help another fellow human at the expense of his own time.

"I hope that sharing these videos will help to spread awareness about how road safety is a shared responsibility and show why we should not generalise all PMD riders as bad apples."

Ryan's Facebook post, which has since garnered over 400 shares, has been met with positive reactions from netizens who praised the GrabFood rider for his act of heroism.

Many called him a superhero and one user commented: "If Grab is watching this, he is a good example and employee. Show him some recognition. All the best to this abang."