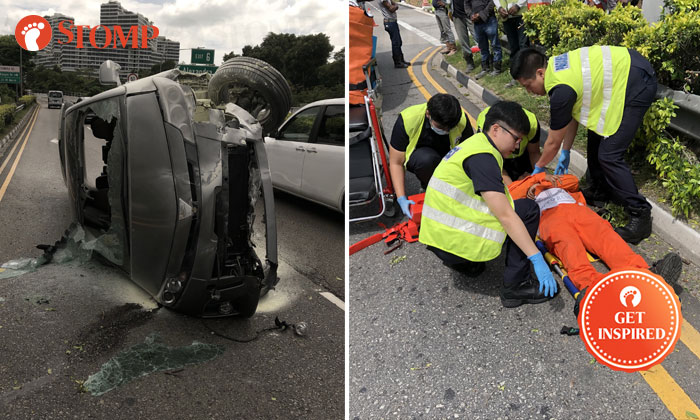 A man was rescued from the burning wreckage of his car by another driver and a group of workers after his vehicle had overturned along the Ayer Rajah Expressway (AYE) on Jan 11 at about 12.35pm.

Stomper Road Runner alerted Stomp to the incident and shared photos he took from the scene.

From the photos, the car is seen lying on its side and its front left wheel appears to be dislodged.

He recounted how he saw the car on fire as he was approaching the Alexandra Road exit.

"I saw the driver was trapped inside the car," said Road Runner.

"He was in shock and could not come out from the vehicle."

He told Stomp that workers at a nearby construction site rushed over and helped him rescue the driver from the car.

"They brought a metal pole from the worksite and I used it to break the car's windscreen," he said.

They then pulled the man out from the car through the opening.

"The workers also brought out two fire extinguishers and we put out the fire just in time," he said.

"We should really appreciate these foreign workers."
In response to a Stomp media query, a Singapore Civil Defence Force (SCDF) spokesman said they responded to the accident along the AYE towards the Marina Coastal Expressway (MCE) at about 12.35pm.

"A person was conveyed to National University Hospital by an SCDF ambulance," he said.

The Stomper told Stomp that the man appeared to have suffered neck injuries from the accident.

He added that he hopes the man makes a speedy recovery.