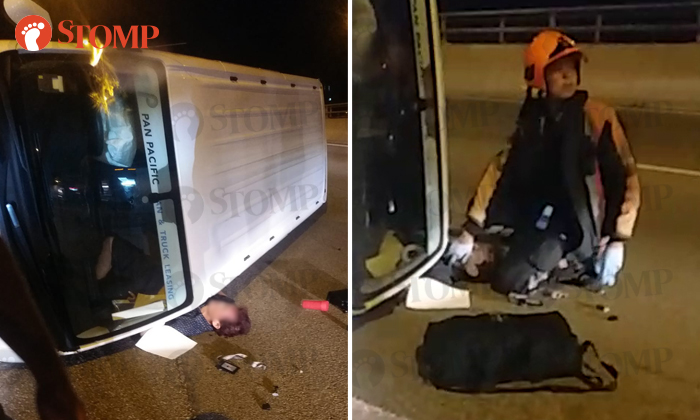 A 45-year-old van driver was taken to hospital after an accident with a car along the Kranji Expressway (KJE) on Wednesday night (March 13).

Stomper Dale was travelling on the KJE at around 10pm when he saw authorities at the scene.

Photos and videos that he sent to Stomp show the driver trapped underneath his van, which was lying on its side.

The SCDF said it responded to the road traffic accident, which occurred near the Choa Chu Kang exit, at around 10.05pm.

"A man was trapped in his vehicle and was extricated by SCDF officers using hydraulic rescue tools," a spokesman told Stomp.

Responding to a Stomp query, the police said they were alerted to the accident at 10.06pm.

The van driver was conscious when taken to National University Hospital.

Stomp understands that he sustained cuts to his head and lip.

Stomper Dale added: "I was stuck in a traffic jam for nearly an hour."

According to tweets by the Land Transport Authority, the congestion lasted till the Woodlands Road exit.