Grab rider suspended after dispute with woman denies hitting her, says she refused to make way on footpath 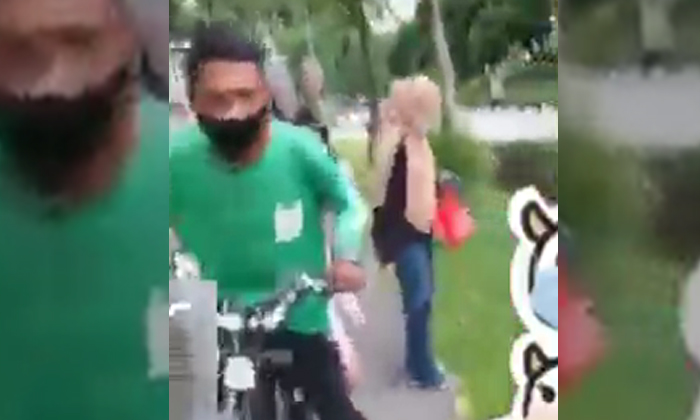 A GrabFood delivery rider who was seen in an altercation with a woman has spoken up with his side of the story.

Stomper D, who wrote in to Stomp on behalf of the rider, said the incident occurred in the vicinity of Block 535 Bedok North Street 3 last Wednesday (May 19), at around 6.30pm to 7pm.

After a video of the incident was posted online, Grab responded that it has temporarily suspended the delivery rider and will be conducting further investigation.

D said he is "personally related" to the GrabFood rider, but did not elaborate further.

The Stomper shared: "I am writing here to defend the GrabFood rider. This is his story but he doesn't know where to speak out to.

"With regards to the one-sided Facebook video where a GrabFood rider ALLEGEDLY hit and hurt a pedestrian, our side has been very quiet about this till now.

"Yes, he was wrong to ride on the pavement, no doubt about it and not denying it. Other than that, the rest are just allegations but has resulted in a police report being made, him being suspended from Grab and all the negative comments.

"Here was what happened:

"The rider had rung the bell from far away to signal to pedestrians. This particular lady had her earpiece in her ear and couldn't hear anything.

"And yes, the man did slow down approaching the 'victim'. When she still couldn't hear or wouldn't budge (dunno which one lah eh), the man shouted, 'Oi' loudly...

"Upon hearing the shout, the 'victim' turned around and was not happy at why the rider shouted, 'Oi'. She even went on to block his way to prevent him from moving as she was very unhappy with the approach.

"This man, with his daughter in tow, kept his cool and just asked her to move. But still, SHE WOULDN'T BUDGE!

"Throughout the drama created by the 'victim', not a single strand of hair was touched by the man in any way at all.

"The only time he touched the 'victim' was to get her bloody handphone out of his face. Even then, it was only her phone that was touched. The man did not lay a finger on the 'victim'.

"Let's be honest and real here.

"If indeed the man was in the wrong and the 'victim' was indeed a 'victim', why would passers-by make way for the man to make a move?

"If indeed the 'victim' was injured, why was no one seen talking or attending to the 'victim'?

"If the 'victim' had indeed been slapped, why was no one helping her out but helped him to 'get away' instead?

"You ever bothered to ask yourselves any of these questions? Were any of you there to witness the incident?

"ONCE AGAIN I STRESS THIS, THE 'VICTIM' WAS NOT TOUCHED IN ANY WAY AND WAS PLAYING THE VICTIM CARD JUST BECAUSE SHE WAS CALLED TO MAKE WAY FOR THE MAN.

"Most of you have not been riding with IGNORANT PEDESTRIANS, be it on pavements or park connectors, regardless of the mode of transportation.

"You have not seen the ugly side of self-entitled Karens who feel that they own the lane and choose to either not give way or to block the path.

"Why not all of you keyboard warriors ride a bicycle for one whole day, following all the bloody rules, in a neighborhood area... And then tell everyone how your experience was like, without being judgemental?

"I personally was a rider too and I know very well how many bloody Karens are out there.

"This man lost his job, his reputation and almost his mind. He lost everything because of a Karen video. You can see how he was keeping his cool as he had his daughter with him.