PAB rider pleads with man who wanted to report him to police: Grab encourages safety and graciousness 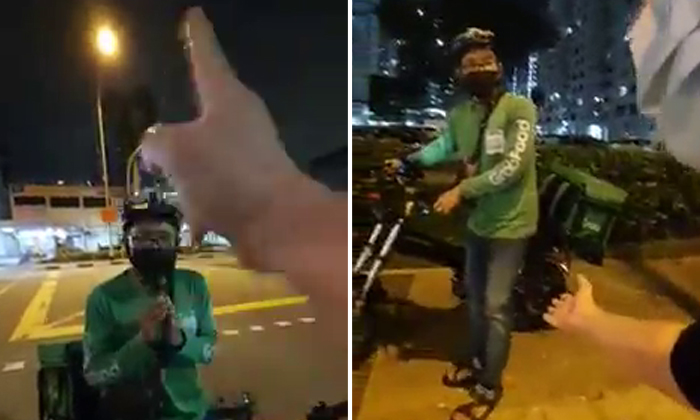 Ride-hailing and delivery giant Grab has responded to a video in which a delivery rider was seen pleading with a pedestrian who wanted to report him to the police for dangerous riding.

According to Roads.sg, the incident occurred at Marine Parade Central on Monday (April 26).

A video of the dispute was also posted on Facebook groups Everything Singapore by Stomp and Complaint Singapore, where they have generated heated discussion.

In the video, a GrabFood deliveryman can be seen riding a power-assisted bicycle (PAB) on a footpath.

The rider apologises profusely while holding his palms together in a pleading gesture, saying: "Eh uncle, sorry sorry, I earning a living only."

However, the man continues chiding the rider for going "very very fast" and adds: "You cannot do like that one, you might bang other people, you know."

He also insists on going to the police station.

The rider can be heard saying "sorry" and "don't lah" multiple times as the man remains adamant on bringing him to the police station.

The man also scolds the rider almost hitting another pedestrian earlier and says: "You come with me to police station. I don't care, I don't care. So dangerous, you ride so fast."

The rider continues apologising and pleading with the man, who is then heard saying: "I know you all people, very very rude one."

The rider can be heard saying: "You report already my family all gone already," and admitting that "it's my fault." He also promises not to do it again.

The man continues berating the rider, who says sorry non-stop, before appearing to be somewhat appeased.

In response to a Stomp query, a Grab spokesman said: "We regularly remind our delivery-partners to look after their own safety and that of fellow road users by adhering to safety regulations and requirements when they are out making deliveries.

"Delivery-partners who are caught flouting the rules can face suspension from our platform.

"Pathways and roads are shared spaces and we encourage everyone to consider each other's safety and be gracious to each other."