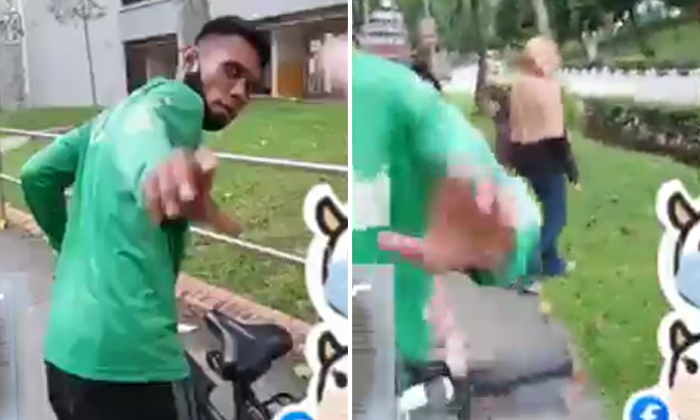 Grab rider suspended after dispute with woman denies hitting her, says she refused to make way on footpath

Ride-hailing and delivery giant Grab has temporarily suspended a delivery rider who was caught on camera in an altercation with a woman.

A video of the incident that occurred on a footpath at Block 535 Bedok North Street 3 was posted on Facebook.

In the video, a woman can be seen yelling at a power-assisted bicycle (PAB) rider on a pavement.

The cyclist is seen wearing a GrabFood shirt, but Stomp understands that he was not on an active booking during the incident.

The woman can be heard shouting, "Help! He slap me! Help!"

Another female is seen getting onto the PAB as a pillion rider during the dispute.

The cyclist tries to ride off with his pillion while the woman continues shouting. He can be seen swatting her away and telling her to "move lah".

The woman is then heard shouting, "You beat me for what?" and "I will call police!"

In response to a Stomp query, a spokesman for Grab said: "We have temporarily suspended the said delivery-partner and will be conducting further investigation.

"Safety is of utmost importance to Grab and we regularly remind our delivery-partners to adhere to safety regulations and requirements when they are out making deliveries."