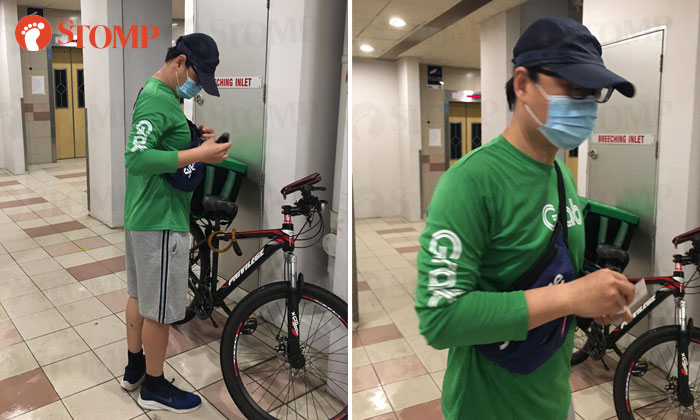 The police and Grab are investigating an incident where a GrabFood rider allegedly hit a resident at the void deck of a block at Punggol Field on April 8 at about 7.30pm.

Stomper James shared that the rider was "riding at the void deck recklessly knocked into and injured my dad", who had been sorting through his mail near the letterbox.

According to James, when his dad then confronted the rider for riding too fast, he replied with a "f*** you" and proceeded with his delivery.

"My dad waited at the void deck for the rider to complete his delivery and attempted to stop him from leaving while waiting for the police to arrive," he said.

The rider allegedly refused and got away.

James said his dad experienced pain in his right thigh and was taken to Sengkang General Hospital by ambulance.

He was given five days of medical leave as a result of his injuries.

James added: "I hope this incident can further nudge the government and Grab to impose stricter rules to govern riders as I am sure you must have seen as well, that there have been so many accidents recently with riders riding recklessly largely due to, in my opinion, their ability to remain anonymous thus going unpunished."

The police confirmed with Stomp that a report was lodged and that investigations are ongoing.

In response to a Stomp query, a Grab spokesman said: "We are aware of this incident and are investigating."

Related Stories
Grab cyclist arrested after collision with 8-year-old girl on footpath leaves her needing eye surgery
52-year-old woman gets 5 stitches on the head after cyclist crashes into her
Cyclist taken to hospital after accident with car in Yishun: 'I saw blood all over the road'
More About:
grab
GrabFood
pedestrian
bicycle
cyclist
injured