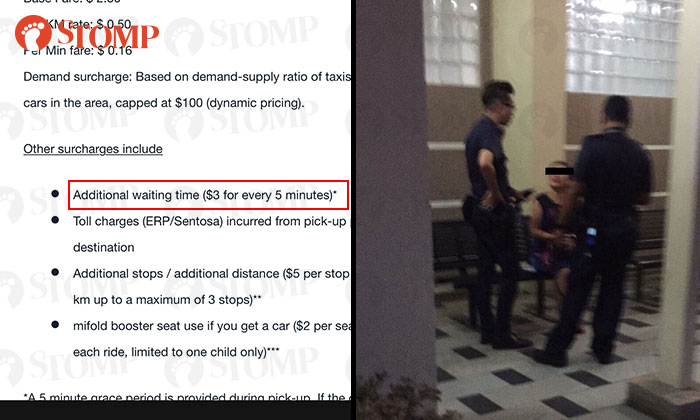 Stomper J, a Grab driver, picked up a customer who not only refused to pay the $3 penalty fee for being 5 minutes late, but also made a fuss and even called the police.

The incident happened at around 6.15pm yesterday (Aug 15) when J picked up the customer from the Marina Bay Financial Centre (MBFC).

The passenger was 5 minutes late, and J informed her that there would be a $3 penalty fee imposed, as the customer had opted for payment in cash.

According to J, the passenger remained reticent and did not speak even after being informed about the penalty fee.

Upon reaching their destination at Fernvale Road, the passenger refused to pay the extra $3, and the two got into a heated argument, during which she called the police.

The passenger demanded J to show her the terms and conditions on the Grab app which stated that she would be subjected to the penalty fee.

J promptly found the clause in the app and showed it to her.

However, the passenger still refused to pay, insisting that she did not know about such a policy.

She then scolded J and slammed the car door, before sitting down on a bench at the foot of the block.

Officers arrived at the scene at around 7pm and questioned the two over the incident.

“She started to cry.

“I told her it’s not about the money and she was wasting my time.

“The officers told me that if she had damaged my car, I could file a police report.

"To all grab and uber driver beware of this type of passengers!"

Related Stories
Passenger and Grab driver have shouting match after she calls for Uber, but boards wrong car
Man argues with LTA officer over his e-scooter -- then takes things to the extreme by trying to destroy it
Man blocks path of taxi with passenger inside -- all because of an argument
More About:
GrabCar
passenger
unreasonable
argument
Fernvale Road
Marina Bay Financial Centre