Passenger and Grab driver have shouting match after she calls for Uber, but boards wrong car 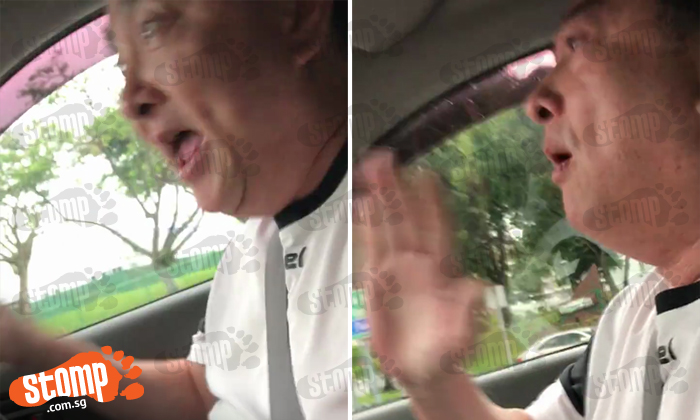 Stomper Hilary was involved in an argument with a Grab driver on Jan 2 at around 6.30pm, after she realised that she had boarded the wrong vehicle 10 minutes into her journey.

According to Hilary, she had called for an Uber ride as she wanted to go from her house at Jalan Damai to Gentle Drive in Novena.

Upon getting a call from her Uber driver, Thomas, informing her of his arrival, Hilary saw a driver gesturing for her to enter his car.

Thinking that he was Thomas, Hilary got on the ride - only to realise later that this was a Grab driver.

It turned out that he had picked up the wrong passenger and she had boarded the wrong car in the unfortunate mix-up.

Hilary, who also recounted her experience on Facebook and posted a video showing the 'second half' of the dispute, said:

"My hands were full from multiple bags of food and (HOT) drinks, and I called for an Uber from my house at Jalan Damai to Gentle Drive (Novena area). The trip costs around $8.50.

"My Uber driver, Thomas, called to inform me that he had arrived. I looked around and saw this driver of SJE362K signalling me to get in the car.

"Since I was in a rush, I hastily got in but I got to the front to peep at the license plate. Checking my Uber app, '8-2-7-0.. wrong eh?' I thought to myself. I questioned the driver why was the license plate different and he grunted, 'Uh uh uh hurry'.

"Knowing that Uber would only reveal the passenger's location upon confirmation, I informed the driver of my exact location. He acknowledged with the same grunts and took off.

"I was 10 minutes into my ride, when my REAL Uber driver, Thomas called. He told me he was waiting for me at my destination.

"I laughed, after realising how such a simple act of blunder can cause the inconvenience of four different parties.

"Despite that, I ended off amicably with Thomas and cancelled my Uber order.

"This Grab driver though, started to get emotional and BLAMED me for getting into the wrong cab.

"When his customer called, he said, 'Got one customer got into the wrong cab. I can make an u-turn to fetch you. If YOU can't wait, YOU cancel'. (What? Even with his side of customer he's pushing the responsibility to him/her as well?)

"I explained to him that I in fact, did 1. checked the license plate with him and 2. reaffirmed my location - which he denied I did any of those things at all.

"The VERY-EMOTIONAL driver started to tell me that he was going to drop me off either at the side, or back to the original location.

"I was already 10 minutes into the ride and I felt that it was unreasonable so I requested to be brought to my stated location instead. However, he started yelling, 'HOW WILL I KNOW HOW TO GO TO YOUR PLACE AT NOVENA?'

"When I offered the use of GPS as a guide, he yelled, 'THEN THE CHARGES HOW? YOU CALCULATE LA. YOU WANT ME TO FETCH YOU CALCULATE!' Shouldn't there be some sort of distance calculator in the app?)

"At first, I told him how much I was being charged for on the Uber application originally. He angrily rejected it, saying that it was 'not right' to use the previous figure since it was a different transport provider.

"Seeing that I couldn't come up with a suitable figure, he started to insist that he would be dropping me back at the original location.

"It was only then I got mad. I was carrying multiple bags of food that were heavy and time-sensitive. I was getting YELLED AT for a mistake that we both could have agreed we BOTH made.

"I then threatened to make a complaint to Grab, requesting for his mobile number for identification.

"Please refer to the video from this point.

"To all who had bothered to read the post up to this point: Emotional drivers such as these can be dangerous on the road. Do you think with their elevated emotional status, they will be concentrating on the road?

"This was indeed an unpleasant experience with an aggressive driver with poor, poor service level. I hope nobody else will have to experience such encounters."