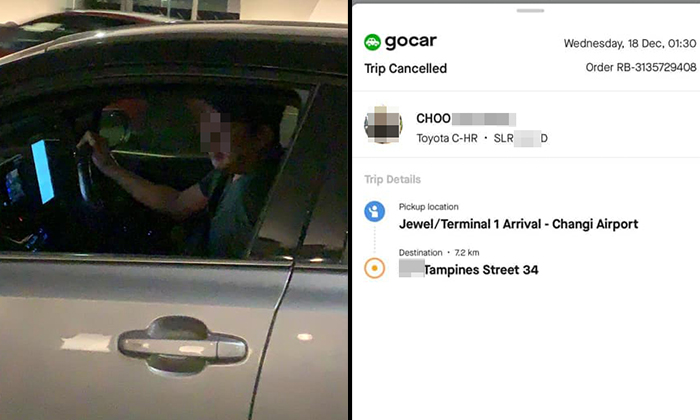 Gojek has responded to an incident where a driver allegedly kicked three passengers off a ride after the latter refused to tip him.

Facebook user Joseph Lam said in a post at 2.55am on Wednesday (Dec 18) that he got a Gojek to pick him up from Changi Airport Terminal 1 where the fare was $14.

Joseph said: "This driver had been showing signs of weirdness when he picked us up."

He described that the driver had welcomed him back to Singapore and then asked if that entitled him to a tip.

Joseph offered to give him a five-star rating, to which the Gojek driver said it is of no use unless it's for a Grab driver.

The driver then said: "Grab surge is $21 for a trip to Tampines now, so it will be nice if you can leave me a tip. Do you mind?

"Normally I will suggest my clients to leave me a tip of $3 if they don’t mind. Do you mind?"

Joseph said in his post that at this point, he was "already kind of pissed" as he had just arrived from a red-eye flight.

The driver continued talking as Joseph ignored him, but the former asked again if they mind leaving a tip.

The driver then replied: "Well ok if you do mind, I guess I will have to drop you at the nearest bus stop.

"I asked if you mind tipping me and you said you mind. So do you mind me dropping you off here at the middle of the road?"

Joseph and his two companions ended up getting off the Gojek at a bus stop along the airport.

He said that Gojek had reached out to him and the driver has been suspended for a period of time.

The post also said that the driver requested a tip because he waited more than five minutes for the passengers.

In response to Stomp queries, a Gojek spokesperson said: "We do not condone this kind of behaviour from our driver-partners.

"Our policies around conduct are clearly emphasised to them in our driver-partner handbook and during the on-boarding process.

"We looked into this case as soon as it was brought to our attention and have spoken to both parties to resolve the matter.”

Related Stories
Gojek driver takes passenger to wrong destination and allegedly forces him to get out in heavy rain
Gojek investigating case of driver failing to pick up couple after telling them "the weather is too hot"
Gojek driver issued warning by LTA for recording and sharing viral video of himself and passenger
More About:
Gojek
bad service
complaint