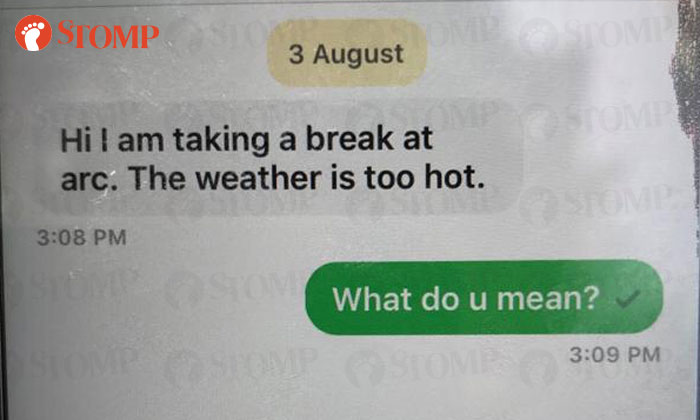 Gojek told Stomp that it is investigating an incident where a Gojek driver failed to pick up an elderly couple after telling them "the weather is too hot".

Stomper Justin alerted Stomp to the incident on behalf of his friends, an elderly couple.

The couple had booked a ride on the Gojek app from their office at Citilink Warehouse Complex in Pasir Panjang to their home in Seletar on Saturday afternoon (Aug 3).

At 3.08pm, the driver messaged them and said he was taking a break at Alexandra Retail Centre (ARC) because it was "too hot".

The couple asked him what he meant and he did not respond further.

"The couple tried contacting the driver but he remained uncontactable throughout," said Justin.

"Worst of all, the driver did not even bother to cancel the ride and the poor old couple had to cancel it so that they could book another ride.

"What lousy service standards from this Gojek driver!

In response to a Stomp query, a Gojek spokesman issued the following statement:

"Gojek takes all feedback from riders seriously and are investigating this incident.

"Riders are encouraged to get in touch with Gojek’s customer care team directly via our in-app help function or hotline for assistance.

"This will help us to create the best user experience for both our riders and driver-partners.

"We are committed to providing the best experience to our users and do not tolerate impolite or irresponsible behaviour by driver-partners or riders.

"We have since reached out to the parties involved to resolve the matter."