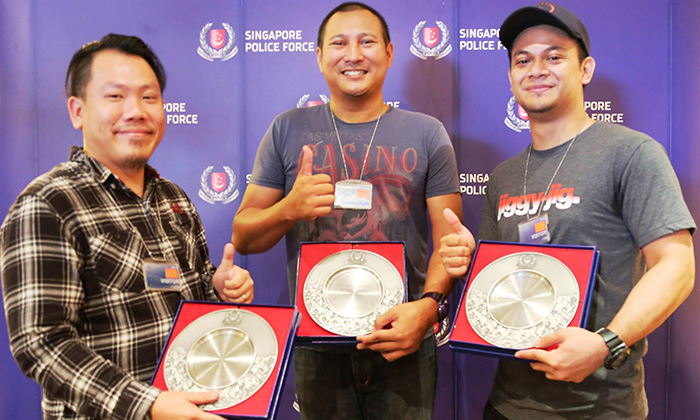 Three public-spirited civilians are commended in a ceremony held at Jurong Division on Tuesday (Oct 11) for their assistance in nabbing a snatch thief at Marsiling Lane.

According to Singapore Police Force's Facebook page, the theft case took place on Oct 10 at about 3 pm.

A 30-year-old female victim was at the void deck of Blk 214 Marsiling Lane when the suspect suddenly approached and snatched her gold necklace.

The suspect then fled towards the main road while the lady shouted for help.

The three men who were nearby then chased after the suspect and eventually detained him along Marsiling Lane.

The Police arrested the suspect after being alerted to the incident and the stolen necklace was also recovered from the suspect.

Preliminary investigations revealed that the suspect is also believed to be involved in another similar case and the suspect will be charged in Court on Oct 12 with an offence of Snatch Theft.

Kudos to these three men who proved that not all heroes wear capes!

Related Stories
Maybank staff help prevent elderly woman from being scammed $200,000
You'll be left inspired by how Singapore's everyday heroes go all out to help others
Thank you reservist officer, for your encouraging words to my son at Yishun open house
More About:
inspiring
kind
kudos
police
award
thief
theft