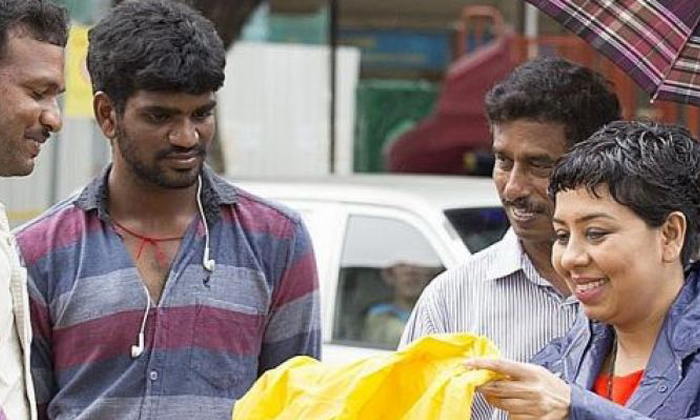 Such was her dedication to helping migrant workers, even a fractured foot could not stop her.

Despite fracturing her left foot on June 25, Singtel's assistant general counsel Dipa Swaminathan simply took painkillers, used a pair of crutches, and was out in Little India the next day to hand out raincoats and phone cards.

"I knew that I just had to get there, since the distribution was scheduled and everything was already planned," the 44-year-old told The New Paper in a phone interview from Spain, where she is on holiday with her foot still in a cast.

"I didn't tell the doctor about me going for the distribution. I am sure they wouldn't have applauded the decision!"

Ms Dipa is one of the four individuals who are championed in Singtel's inclusivity campaign "Giving is Connecting", which pays tribute to staff who have contributed to promoting a more inclusive Singapore.

She is the founder of the "itsrainingraincoats" initiative, which distributes raincoats and other items such as clothing and food to help foreign workers.

Ms Dipa said: "These men work in the blazing heat or stifling haze, live in cramped and sometimes unhygienic conditions, often risking life and limb - and are not always treated fairly.

"There is a saying, 'You can't change the world, but you can change the world for one person.' And with these guys, I just feel that it is not very hard to do that extra little bit, which makes a big difference for them."

Last Deepavali, she organised a group of about 40 people, including children, to give out sweets, phone cards, water bottles and arm sleeves to migrant workers in Little India.

Ms Dipa recently took unsold food from the Starbucks in Singapore Polytechnic to give to migrant workers in a gesture that went viral online.

She is now working with Starbucks to broaden the initiative.

While championing the rights of such workers, Ms Dipa has met employers who can be anywhere between defensive and downright abusive.

She said: "One employer, whom I called up over unpaid wages for some of his workers, said he was on a golf course and he couldn't be bothered about the issue."

However, her determination to help the workers has never wavered and the reward is the public becoming more conscious about migrant workers' welfare.

She said: "I would love to see Singapore evolve into a society where these men are treated with compassion and their basic rights are assured, such as their right to be paid wages and their right to basic medical care.

She hopes to 'open doors' for disabled

She had such a hard time finding employment that now, she is working to make finding jobs for the disabled easier.

She said she was frustrated by the continual rejections from employment centres, which made empty promises of getting back to her.

She told The New Paper: "After my interviews, they always said they would call me later, but they never did. It really pissed me off."

This cycle of going for interviews and receiving empty promises went on for about several years, two to three years ago, until she realised she was going through the wrong channels to find jobs.

The Community Development Council linked her up with the Society for the Physically Disabled.

It was then that Ms Madiah realised she would have a much better chance of finding employment through the organisation.

She now works at Singtel as a customer care officer who handles queries over web chat.

Ms Madiah shares her experiences with her disabled friends and has ambitions to make finding employment easier for them.

"Most companies are not open to people with disabilities and I have a lot of friends who are not working because they said it is not easy for them to find a job," said Ms Madiah.

"I hope that if I show that I can do a good job, it will help to open doors (for employment opportunities) for other people with disabilities."

To reach her workplace by 9am, she wakes up at 6.30am and leaves her home in Clementi an hour later to catch a bus to the office.

She has trained herself to type expertly on the keyboard with her stumps and is able to reply to customers' queries.

Ms Madiah said with a laugh: "I have encountered some customers who ask me if I am a robot or a real person, and it's really funny."

It has been a fruitful year for Ms Madiah so far.

Other than being employed by Singtel in March this year, she also found love.

She married cleaner S-Rosslee Dolah, 43, a month before that.

It is her second shot at love after a divorce in 2013.

Sporting a shy grin, she said: "I want to concentrate on my career at Singtel first, and maybe in a couple of years, I might want to have one or two kids."

'Happiness is something you can create and give'

He takes joy in bringing smiles to kids, one balloon at a time.

Mr Teo Ek Thong, 54, a voice engineer at Singtel, told The New Paper: "(When she was) in Primary 2, my daughter frequently attended her classmates' birthday parties, and I would wait for her nearby. It was so boring and hot, so one day, I dropped by at the party and offered to make balloon animals for the kids.

"All the kids cheered and I was kept busy. Plus there was air-conditioning, food and kids' smiles!"

Since then, he has been a regular presence at birthday parties with his daughter, and the skills honed at these parties have been put to good use at various events including grassroots events and charity fund-raising.

On average, Mr Teo has two balloon sculpting events a month. The recent was a fund-raising carnival for Pathlight School last month.

He is also helping out with Pek Kio Community Centre's National Day celebrations, through training a group of volunteers to make balloons for a big decoration.

He said: "I get one smile back for every balloon I give away. I learnt that happiness is not just a nice thing to hope for, but something you can create and give."

Mr Teo picked up balloon sculpting a decade ago at a two-hour workshop organised by the Singtel Recreation Club.

He was amazed by balloon sculptures he saw on television and thought it would be nice to make balloons for his daughter, who was a Primary 1 pupil then.

Although his two children have since grown up, Mr Teo still aims to bring smiles to more faces.

He said: "I am looking forward to extending my balloon skills to help charity organisations transform their event venues into a balloon wonderland and letting the beneficiaries immerse themselves in a different world."