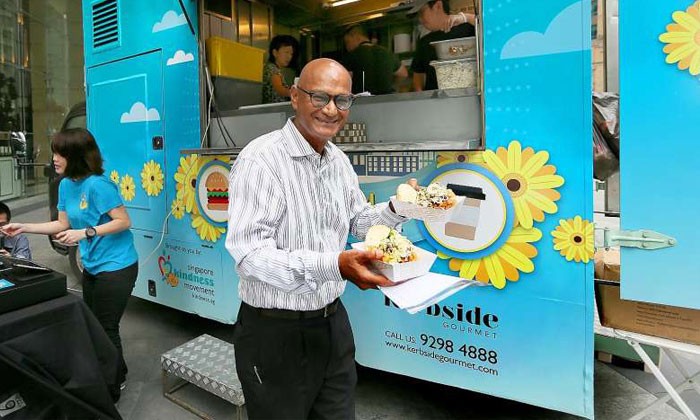 Those working at Biopolis can have a burger today and pay the meal forward to a foreign worker from China over the Chinese New Year.

The Singapore Kindness Movement has partnered Kerbside Gourmet to take its food truck near offices so Singaporeans can start the year in the spirit of giving.

The burger sells for $15 and the coffee is priced at $4. But if customers remember their Ps and Qs, they can get $2 off the burger and $1 off the coffee. There is also a donation box.

"Everyone thinks December is the season of giving and people make their resolutions, but what happens after that?

"We want to show that kindness doesn't actually take a lot - it could just be saying please and thank you to the service staff," said Ms Tay.

Yesterday, the food truck sold about $500 worth of burgers and coffee and received $200 in the donation box.

Ms Tay said the idea for the food truck came from a pop-up cafe the movement ran in 2014. Then, a kindness cafe was set up at One Raffles Place and patrons who greeted the service staff kindly got discounts on their coffee.

"So we thought we will sell food this year, provide lunch to PMETs and, at the same time, give back to migrant workers," she said.

The movement will treat the migrant workers to a meal over the Chinese New Year since many of them will remain in Singapore and perhaps be homesick, the airfare back to China being expensive.

One of the food truck's first patrons yesterday was lawyer Ajaib Haridass, 67, who works nearby at Clifford Centre.

"I read about it in the newspapers and made a mental note to come down and give my support. I think it is a good cause," he said.

•The Kerbside Gourmet food truck will be at these locations from 11am to 2pm: Today: Matrix Building at 30, Biopolis Street. Tomorrow: Ocean Financial Centre at 10, Collyer Quay.