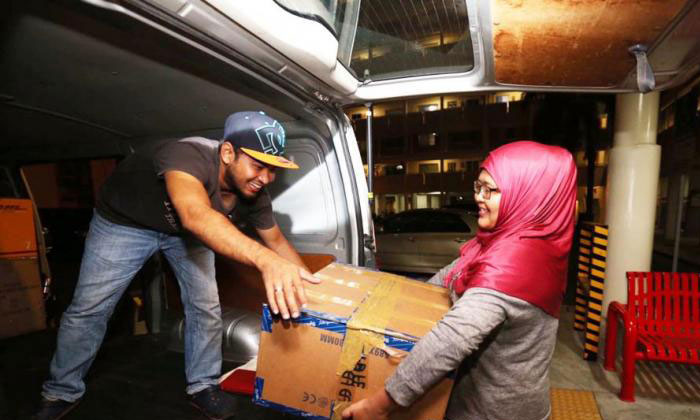 The victims of the 6.5-magnitude quake have no homes, no belongings and no hospital. They desperately need food, clean water, medication and blankets, Aceh local disaster agency chief Puteh Manaf told AFP.

When Singaporean Nora Nurdin, 32, saw and read about their suffering, she was moved to act and started a donation drive. News of the quake also struck a chord with the student care teacher as her parents live in the Riau Islands. Her father, Dr Nurdin Basirun, is the governor there.

She told The New Paper: "It has always been in me to want to give back to the less fortunate. I've contemplated it several times, but the quake felt like the right time for me to do my part."

In the post, the items she listed included clothes, blankets and ready-to-eat food. She also listed her mobile number.

Soon, her phone was ringing off the hook. When she first spoke to TNP yesterday afternoon, she had already received more than 40 calls.

"I'm really very surprised because I didn't expect this to blow up so quickly. From morning till now, I think I received more than 40 calls."

She asked interested donors to be patient as she tried to attend to every call as the response has been overwhelming.

Madam Nora and her husband are still figuring out how to make sure the items reach the Aceh quake victims.

The donation drive is a family effort - she will spend the next few evenings with her husband after work to collect the items from different families.

The couple, who live in Sengkang, kicked off the first round of collection around the eastern part of Singapore last night at about 8pm. As of 10pm, they had collected 11 boxes and 10 bags of supplies.

The plan is to get the items to arrive at Riau Islands, where her parents are based. The exact mode of shipping the items has not been firmed up yet, said Madam Nora.

Meanwhile, her father is arranging for a plane to transport the supplies to Aceh, she said.

When asked if it was tiring to juggle her work with coordinating a donation drive, the 32-year-old said without hesitation that it wasn't.

Instead, she is recharged and encouraged by the responses to her attempt to help others in need.

"I like helping people. My parents have always taught me to put myself in the shoes of the less fortunate, to put others before ourselves. That's why it's never tiring," she said.

Other relief agencies are also helping.