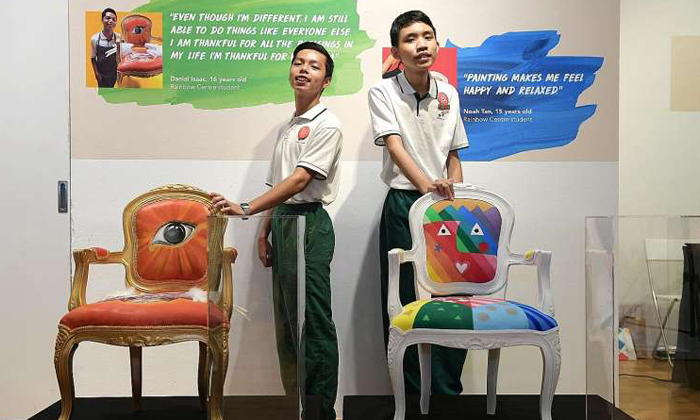 Two chairs painted by youths with special needs were auctioned for nearly $50,000 yesterday.

Painted by Rainbow Centre students Noah Tan and Danial Isaac, the chairs were put up for a silent auction at Ion Orchard yesterday with a starting bid of $20,000 each.

In all, there are 55 child-sized Louis-style chairs decorated by students from the centre in collaboration with artists. The chairs are on display until Dec 15 at level 3 of the mall, on a rotational basis.

All chairs can be purchased for $8,000 and above. Proceeds will go to the centre, a voluntary welfare organisation that serves about 1,200 students at its two special needs schools in Margaret Drive and Yishun Park.

The centre is raising funds for a new wing at its Margaret Drive campus, which is co-funded by the Government and due to be completed in the second half of next year at an estimated cost of $17 million.

Fifteen-year-old Noah, who has mild to moderate autism, painted a version of a portrait that previously won special mention at the 2014 Singapore Youth Festival art exhibition.

His chair, titled The Face & I, features his favourite colours and shapes, said his mother Rosyniah Wang, 49, a housewife. "It took a month to complete, and he put in a lot of effort. He would wake up in the morning at 8am, break for meals and then work until evening time."

Danial, who has cerebral palsy, took two months to complete his chair, titled Heart of Freedom, which he said represents his challenging journey as well as his mother's support.

"It is about how my family takes care of me and teaches me about life," said the 16-year-old.