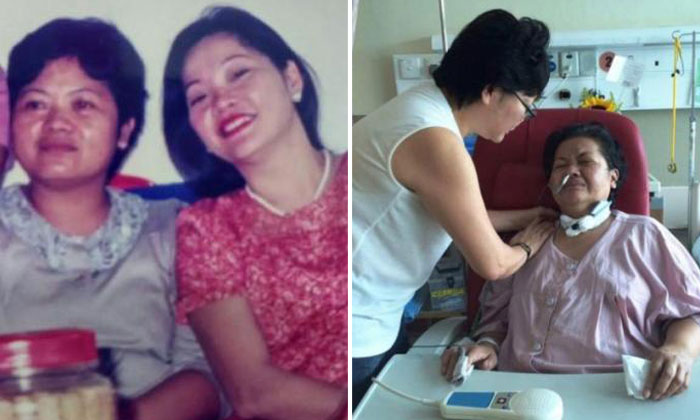 It was an earnest plea for help.

And over the past two days, the story of a Singaporean family trying to raise money for their beloved domestic helper after she suffered from a sudden stroke touched many hearts.

The strong bond between the family of Madam Dora Sern, 57, and their Filipino domestic helper Felicidad Muna Mico, 57, was first reported in The New Paper on Monday.

After TNP highlighted her plight, the donations rose sharply from $8,000 to more than $42,000 on crowd-funding site GiveAsia yesterday.

Madam Sern, a masseuse, said she was surprised by the overwhelming response of more than $34,000 in two days.

She told TNP: "My family and I are very grateful that the public gave generously, along with their words of encouragement.

"It really shows (Singaporeans) have a big heart for others."

Besides their fund-raising efforts, Madam Sern and her three children, who are in their 30s, had also spent all of their free time with Madam Mico at Changi General Hospital since Oct 28, when she was first admitted into the intensive care unit.

They massaged her, comforted her, and did some simple exercises with her when she was eventually transferred to a normal ward.

Their kindness to their helper moved many people.

Donor Jill Toh wrote on the GiveAsia page: "Dora, thanks for showing society what it means to extend love and care to their helpers - to see Felice as one of you, and not someone less.

"The world truly needs more people like you. Hope Felice has a speedy recovery."

Madam Sern also shared some good news on the website that Madam Mico had returned safely to Manila on Monday.

Her condition was stable enough that she could fly back in business class on Philippine Airlines with a nurse, instead of returning home by air ambulance.

She had turned to crowd-funding when she realised the insurance she had bought covered only $15,000 in hospitalisation.

She told TNP earlier she had not been aware that she could sign up for an insurance plan with better coverage as the family had automatically paid it every year.

Although Madam Sern is happy that her helper is back home with her family, she is still concerned about her medical care in the Philippines.

The doctors in Madam Mico's hometown decided she was well enough to recuperate at home and a nurse would visit every day.

Madam Sern plans to fly over to visit Madam Mico in two weeks and may stay for a while.

She said: "Felice's daughter had wanted her to go back to the Philippines as soon as possible because she was so worried about her.

"She also thanked me for giving her mother a job and treating her like family for the past few years."

"Felice has also told her daughter that she misses us.

"My family told me I should stay with Felice to take care of her if needed."

It was the start of a harrowing period for the woman and the family she had served for 25 years, reported The New Paper on Monday

Madam Dora Sern and her three adult children watched their helper suffer at Changi General Hospital's intensive care unit for about a week.

Madam Mico was told then that she might not be able to talk or move the right side of her body.

Madam Sern shared her helper's plight on a crowd-funding site GiveAsia last Wednesday after she realised the insurance she had bought would not cover Madam Mico's medical bills.

By last weekend, Madam Mico had made enough progress to be moved to a normal ward.

Related Stories
Employer hoping to raise over $86,000 for maid of 25 years who suffered stroke
19-year-old Chinese girl sells body 'to use at will' to raise money for mum's cancer treatment
19-year-old girl in China tries to sell virginity to fund brother's cancer treatment
maid
heartbreaking
heartwarming
donation
get inspired
inspiring