Employer hoping to raise over $86,000 for maid of 25 years who suffered stroke 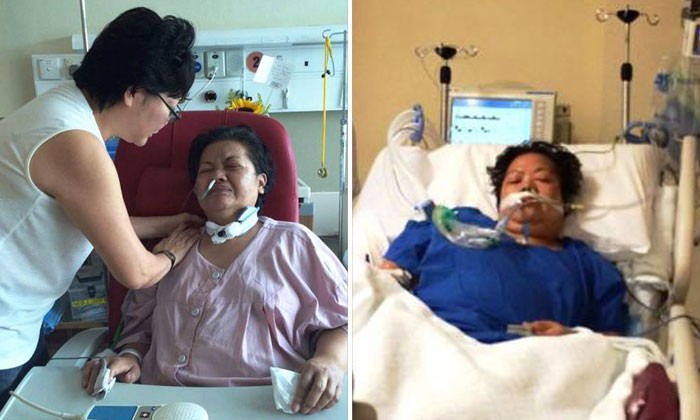 But last month, their roles were reversed.

It was the start of a harrowing period for the Singaporean family as they watched their beloved "Felice" hooked to various tubes at Changi General Hospital's (CGH) intensive care unit (ICU) for a week.

Then came another shock - Madam Mico's hospital bills will cost an estimated $55,000.

The masseuse hopes to raise $86,600. That will also cover the cost of sending Madam Mico home by air, rehabilitation care in the Philippines and basic provisions for her family for a year.

Madam Sern, who renewed Madam Mico's contract for two years in July, was aware that all foreign domestic workers had to be covered by insurance but she did not know the details of the coverage.

She found out only later that her insurance plan covers the minimum $15,000 for hospitalisation.

A check online confirmed that her premium costs about $200 for a 26-month policy.

Madam Sern told The New Paper on Friday: "The insurance was paid each time we renewed her contract every two years.

"It has been 25 years since we hired her, and we are no longer in contact with any agents, so we are not aware that we can pay a higher premium for better coverage."

Madam Mico, who has high blood pressure, has recovered significantly since she was rushed to the hospital last month.

The doctor's diagnosis was initially bleak. The family was told that she might not be able to move the right side of her body and may never speak again because she will need a tracheostomy tube in her windpipe to help her breathe.

She was later moved to the high dependency ward and eventually to a C Class ward at CGH.

Madam Mico's recovery has been remarkable over the past few days - her tracheostomy tube was removed, and she can do simple exercises with her right hand.

The doctor decided she was fit to fly, and she left for Manila by air ambulance with a nurse yesterday night.

She will be transferred to a hospital near her hometown, about eight hours away from the capital.

Madam Sern and her children, who are in their early 30s, took turns to keep their helper company at the hospital every day.

They gave her massages and talked to her though she could hardly respond.

Madam Sern said: "My oldest son, Eugene, was the one who discovered her unconscious.

"He thought she was just resting but realised something amiss when he tried to wake her up for dinner.

"I couldn't stop crying when I saw her in the ICU, and I would break down again every time I was at home.

"I couldn't cry in front of her because I had to put up a strong front."

Madam Mico, who earns $600 a month, lives with the family in a five-room flat in Sengkang.

She was an active member of Madam Sern's church.

Madam Mico had been looking forward to Eugene's wedding, which was a week after her stroke.

He had planned to serve her tea at the traditional Chinese tea ceremony to thank her for raising him.

Madam Sern added: "My son couldn't hold back his tears for a few minutes in front of hundreds of people when he was giving his wedding speech in church. He was so worried about her."

Madam Mico, a grandmother of two, also had plans to return to the Philippines after her two-year contract. Her only child, daughter Izelmae, 26, will then leave the country to make a living.

Madam Sern said: "I told her it was not her time to go yet. She still had to enjoy life on earth.

"She was so good to my family and took care of my children so well. We love her so much."

Her youngest son, Mr Ervine Wong, 30, who works in the aerospace industry, said: "She is part of my family, and she was like our second mum when our mum was busy working.

"Aunty was the one we interacted with, and we would chat and share about our lives with her every day."

Employers need to buy medical insurance with coverage of at least $15,000 a year for hospitalisation fees such as inpatient care and day surgery during their foreign domestic worker's (FDW) stay here.

This covers 97 per cent of all inpatient and day surgery bills at public hospitals, said Manpower Minister Lim Swee Say in a parliamentary written reply in August.

He was responding to a question posed by Mr Patrick Tay, an MP for West Coast GRC, about the recourse that employers can take if their domestic helper has an underlying mental illness, cancer or critical illness.

Mr Lim added: "For the minority of employers who face genuine difficulties in paying their FDWs' medical bills, they can seek assistance from medical social workers at the relevant healthcare institutions."

He also suggested individual employers could voluntarily buy additional insurance for greater coverage, or send their FDWs for more medical examinations before employment to check for pre-existing illnesses.

Most basic plans offered by insurance companies cost under $250 for 26 months of coverage.

The plans also include personal accident insurance with a minimum coverage of $40,000.

FDW employment agencies told The New Paper that they usually advise their clients to choose an insurance plan with higher coverage.

Ms Shirley Ng, director of Orange Employment Agency, said most clients choose the basic plans for younger helpers and are willing to pay a higher premium only if they are hiring a helper above 35 years old.

She said: "The increase in premium is marginal, but it can make a difference because if your helper is unwell, she is your responsibility until the doctor certifies she is fit to fly home."

Mr Gabriel Ee, director of Island Maids, said: "Some employers do not see the necessity (for a more expensive plan) and will just buy a basic plan because it is rare for medical bills to go beyond $15,000.

"But it can get painful if you are the exception. The extra coverage will buy you peace of mind."