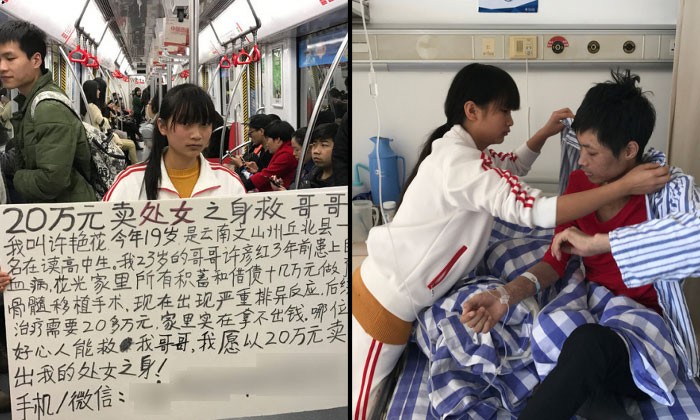 He was diagnosed with leukemia years ago, his treatment draining the family savings.

Fortunately, her blood marrow matched his and he underwent a bone marrow transplant.

However, his body reacted negatively to the transplant and he requires further treatment, which the family is unable to afford.

Hence, she turned to an attempt to sell her body.

Her brother, who was later located by reporters, was described as "thin and weak", and his body "covered in black spots".

His doctor at the hospital confirmed that his body was deteriorating as his fingernails were dropping off, he could not shed tears and had contracted other diseases on top of his leukemia.

When interviewed, the brother said that he was unable to claim the cost of the treatment from his medical insurance.

"I guess she heard that and came to Hangzhou," he explained. "And now I know how foolish she is."

Xu said that she realized that what she had done was wrong, but she did not know any other way of helping.