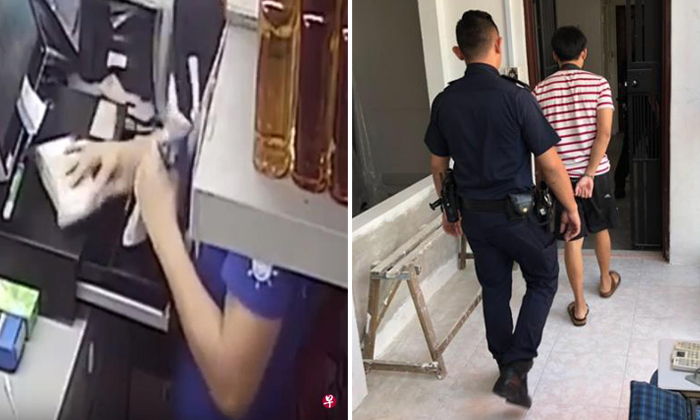 An 18-year-old man was arrested after allegedly stealing around $6,000 from the store that he worked at -- despite the presence of six CCTV cameras.

According to Shin Min Daily News, the incident occurred at Angel Supermart, which is located at Block 326 Woodlands Street 32, on June 11, at around 9am.

The boss of Angel Supermart, Mr Chen Wenfa, told reporters that his staff had turned up for work at 7am that day and found $6,000 missing from the store. He was immediately notified.

Upon checking CCTV footage, Mr Chen was shocked to see how an employee had used his back to block CCTV cameras in order to commit the act.

The 38-year-old called the police.

Mr Chen, who hired the 18-year-old suspect in January this year, described him to be hardworking, handsome and decent-looking.

"[The suspect] was on the night shift. He was supposed to place that day's earnings into a plastic bag each time before knocking off," said Mr Chen.

"However, after checking CCTV footage, we realised that he had stolen the money during his three shifts last Friday, Saturday and Sunday. The amount totalled to around $6,000."

Mr Chen also noted how bold the suspect was to have committed the act as there were six CCTV cameras installed in the store.

Footage shows how the employee had placed money into a plastic bag, which he hid under a table. He then squatted down and removed a backpack from a drawer.

After a few seconds, he placed the backpack under the table, and used his own body to block the CCTV camera.

"I believe that he then placed the plastic bag, which contained the money, into the backpack and left the store like nothing was wrong.

"He did not apologise to me but admitted that he stole because he was addicted to gambling," added Mr Chen.

In response to a Stomp query, the police said they were alerted to a case of criminal breach of trust at 11.21am.

An 18-year-old man was arrested in relation to the case.

Related Stories
Cashier arrested after taking money from Bukit Merah store over 10 times in a day
'Well Groomed Smiley Shop Thief' sends apology letter with $20 after being featured in 'Wanted' poster
Woman chats with cashier -- then takes his wallet from counter at Toa Payoh store
More About:
theft
stealing
arrest