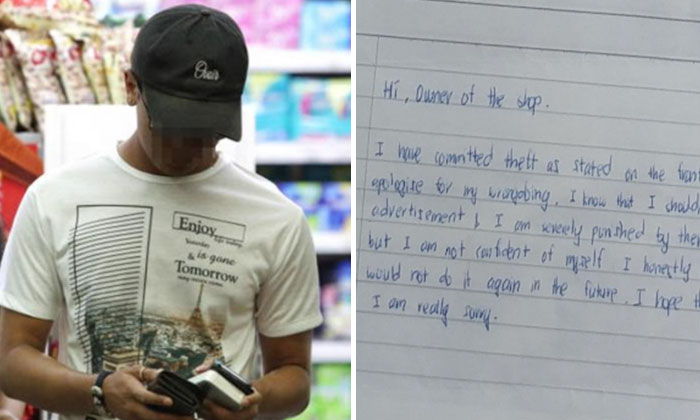 A polytechnic student featured in posters after getting caught on video stealing from a convenience store, wrote an apology letter to the owner, coupled with a $20 compensation, in hopes that the posters would be removed.

However, the owner felt that the letter lacked sincerity, demanding that the student apologise in person, forcing him to finally show up at the store on Monday (April 9).

The incident happened at a convenience store in Eunos.

Three months back, the owner had placed up a poster showing the youth’s face after discovering that he had stolen beer, canned food and cup noodles worth about $10 while combing through closed-circuit television footage (CCTV). 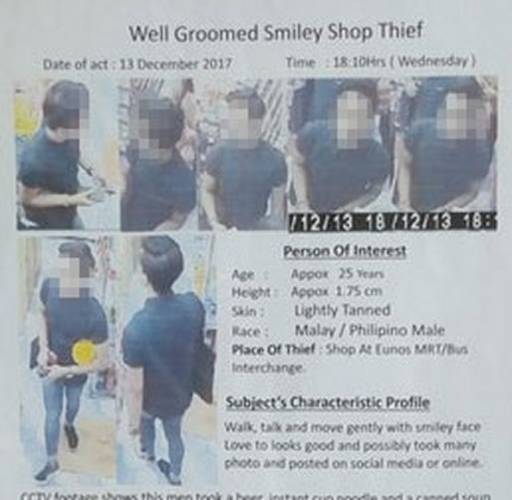 Termed the 'Well Groomed Smiley Shop Thief’ by the owner, the youth looked to be about 175cm tall, dressed well and bore a smile as he acted.

On December 13 last year, the youth had stolen the items while the cashier was preoccupied with another customer.

The posters were placed up in January this year, and just last week, the store received an apology letter written in English.

The owner of the store, Mr Lan, 47, told Lianhe Wanbao that a girl had handed the letter to a store employee before leaving.

“I have committed theft as stated on the front of your shop.

“I apologise for my wrongdoing. I know I shouldn’t do it, yet I did.

“My parents saw the advertisement and I am severely punished by them.

“I should had just come in person to apologise but I am not confident of myself.

“I honestly hope you will forgive me. I promise I would not do it again in the future.

“I hope you can take the poster down. Once again I am really sorry.”

Mr Lan said that the letter came with $20, but did not state the name of the addresser.

He pinned the letter on outside as well, demanding that the youth turn up himself to apologise, or he would pursue the matter.

Wrote the shop’s reply to the apology letter:

“Without any information or contact by this sender, the management could not follow up with security officer, Singapore Police nor Social Media to cease any ongoing investigation over the period.”

It also advised the youth to ‘surrender in person’ and resolve the issue.

Just 10 minutes after the reporters left, a youth dressed in a white T-shirt, shorts, and cap showed up at the store.

He said that he was the one who wrote the apology letter.

Reporters then rushed back to the scene and spoke to the youth.

He revealed that he was 21 years old and a student at a polytechnic.

He also confessed to being the culprit caught on CCTV stealing.

Related Stories
Pushcart owner calls out well-dressed women who took items from his stall at Raffles Place
Police looking for woman involved in shop theft at Compass One
Man takes Longchamp bag with items worth $1k after woman leaves it right beside her
More About:
theft
steal