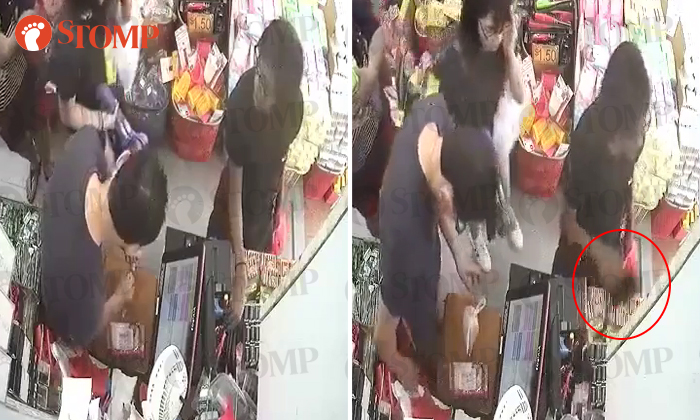 Stomper Jimmy, a shop assistant at a discount store in Toa Payoh Central, realised his wallet was missing at around 4.40pm on March 11 -- and later discovered that it had been taken by a female customer.

Jimmy, a 39-year-old Malaysian, told Stomp that the incident occurred on the first floor of Block 190, Lorong 6 Toa Payoh.

Jimmy said: "I returned from my lunch break at about 2.40pm, and placed my wallet and handphone on the table next to the cash register.

"At about 4.40pm, I decided to buy a drink for myself, so I went to retrieve my wallet and handphone from the table.

"However, I discovered that my wallet was missing."

Upon reviewing CCTV footage, Jimmy realised that the item had been taken by a female customer who had patronised the store earlier.

He told Stomp in a phone interview: "She was browsing items and chatted with me but I thought nothing of it."

In the video, the woman is seen talking to Jimmy while browsing products at the counter.

She later reached out for what is believed to be Jimmy's wallet, before tucking it under her arm and leaving the store.

According to Jimmy, his wallet contained various foreign currencies, including those from his trips to Hong Kong and Dubai, which amounted to around S$1,000. There were also credit and identification cards inside.

A police report was made on the same day.

In response to media queries by Stomp, the police confirmed that a report was lodged and investigations are ongoing.

Related Stories
Woman taps customer on shoulder as man secretly takes and hides someone else's bag
Woman diverts employee's attention at The Arcade store -- then takes dress and places it in big bag
Cashier arrested after taking money from Bukit Merah store over 10 times in a day
More About:
theft
stealing
toa payoh