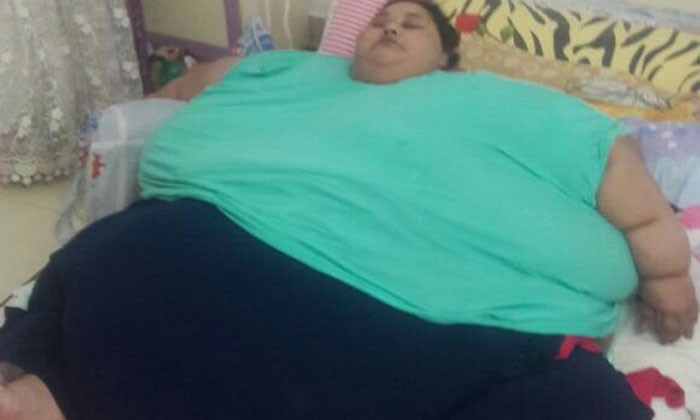 A woman who is thought to be the world's heaviest at 500kg will be flown to India for weight reduction surgery thanks to the intervention of a doctor there.

Eman Ahmed Abd El Aty, 36, will be flown from her home in Egypt on a chartered plane to Mumbai where bariatric surgeon Dr Muffazal Lakdawala plans to operate, says the BBC.

The Indian embassy in Cairo initially denied her visa request as she was unable to travel there in person, the British broadcaster said.

But that changed after the surgeon sent a tweet to India's foreign minister.

India's External Affairs Minister Sushma Swaraj, who is herself in hospital awaiting a kidney transplant, was quick to respond with an offer of help, the BBC said.

Ms Abd El Aty's family says she has not been able to leave home for 25 years now and claim she weighs 500kg. If the claim about her weight is true, then that would make her the world's heaviest woman alive, as the current Guinness record holder is Pauline Potter of the United States who weighed 292kg in 2010.

Dr Lakdawala, who has performed weight reduction surgeries on Indian minister Nitin Gadkari and Venkaiah Naidu, told the BBC that from looking at Ms Abd El Aty's medical reports and photographs, he believes that she weighs at least 450kg.

Ms Abd El Aty's family says she weighed 5kg at birth and was diagnosed with elephantiasis, a condition in which a limb or other body parts swell due to a parasitic infection, Dr Lakdawala told the BBC in a phone call from Mumbai.

"They said when she was 11, she had gained immense weight because of which she could not stand up and would crawl.

"And then she suffered a stroke which left her bedridden and she has not been able to leave home since then."

Ms Abd El Aty is cared for by her mother and sister.

Dr Lakdawala said Ms Abd El Aty's sister got in touch with him in October and he began raising money to bring her over to Mumbai as her family was too poor and unable to bear the costs of chartering a flight.

"We are expecting to fly her to Mumbai next week as soon as the formalities are over," he said.

Dr Lakdawala believes that Ms Abd El Aty does not have elephantiasis, but suffers from obesity-related lymphoedema which causes gigantic swelling of legs.

"She would need to remain in Mumbai for two to three months for the surgery and treatment after which she would be able to return home, but it would take two to three years to bring her body weight under 100kg," the surgeon said.

"I'm hopeful that I will be able to help her, I won't say I'm confident because I think that would be an exaggeration," he added.

Bariatric surgery, also known as weight-loss surgery, is used as a last resort to treat people who are dangerously obese and carrying an excessive amount of body fat.

Ma'am , Eman Ahmed (Egypt) 500kgs requested me 2 save her pls help me get her a medical visa as refused thru normal process @SushmaSwaraj pic.twitter.com/93Fwz6m8iL