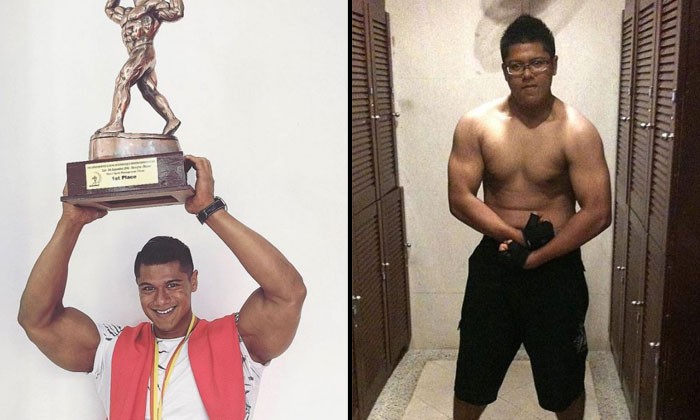 In primary school, he was teased for being "fat" and "lazy".

He was also made fun of for his "elephant thighs".

Now, not only is he a Manhunt Singapore 2016 finalist, he also recently clinched a gold medal in the 50th Asian Bodybuilding and Sports Physique Championship in Bhutan from Sept 2 to 8.

The 22-year-old freelance personal trainer beat 19 other men in the Men's Physique over 170cm category.

It's a far cry from his days in primary school when he would always be benched during hockey games because he was unfit.

"Whenever my team won, my school mates would tell me that I did not deserve it because I was rarely on the pitch," he said.

When he was 14, he started exercising with a dumbbell.

At the age of 17, he started training and eating properly.

Wanting to be able to run faster, jump higher and lift heavy objects led him to pick up power lifting when he was 20.

His efforts paid off - from being 80kg with a body fat percentage of 25 per cent in primary school, his weight now fluctuates between 90 and 95kg, with a body fat level of between eight and 12 per cent.

In April this year, his performance at a local bodybuilding competition, Physique War, impressed Mr Pradip Subramanian, 31, the president and director of the World Bodybuilding and Physique Federation Singapore.

"He has the potential and the talent and I knew that he would place among the top-three (for the competition in Bhutan)," said Mr Pradip.

For four months before the competition, Mr Bawany trained six times a week, with each session lasting about 90 minutes.

Having to follow a strict diet, he could only have foods that were high in carbohydrates once a week.

"I had mood swings due to minimal energy and low carbohydrate intake," he said. "Because of that, the people around me suffered."

Three weeks before the competition, he had to give up carbohydrates altogether.

Though he did not end up placing among the top-three at the Manhunt finals last month, Mr Bawany continued training hard for the competition in Bhutan.

When he got there, the sight of the other competitors from 28 participating countries made him nervous.

"Being the youngest and competing against those whom I had been looking up to was nerve wracking. But I wanted to make Singapore proud too," he said.

Through the support of his family and friends, he did just that - emerging victorious.

Since last year, he has participated in six competitions, from power lifting and bodybuilding contests to a pageant (Manhunt Singapore 2016).

Mr Bawany intends to go for the World Bodybuilding and Physique Sports Championships next year in Mongolia.

He said: "Receiving heartfelt messages from strangers saying that you have inspired them, fires me up to be a better athlete each and every day."