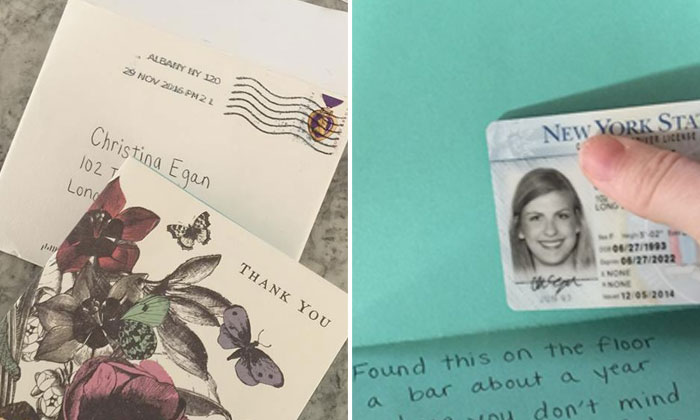 If you have lost your license or identity card recently, there is a possibility for you to find it even after a year later -- we kid you not.

Check this story out.

23-year-old Christina Egan, a recent graduate from Columbia University, lost her license at a bar until it was returned to her by a kind stranger...one year later, reported Distractify.

Having forgotten about the lost license a long time ago, she ordered a new one and moved on with life -- until she received a thank you card in the mail from an unknown address that is.

And it contained her old license and a hilariously written note.

It contained her license and a hilarious note.

Found this on the floor of a bar about a year ago, hope you don't mind I used it for awhile. But- now I'm 21 so you can have it back! Thanks!

Evidently, her license has had one hell of an adventure since she lost it while out one night in Manhattan and the letter was circulated through Albany's postal service.

Hopefully the ID's surrogate owner didn't get in too much trouble being Christina for a year.

But Egan didn't seem to mind. However, she did wish that the stranger included the $10 it cost her to replace the license for the third time within a year.