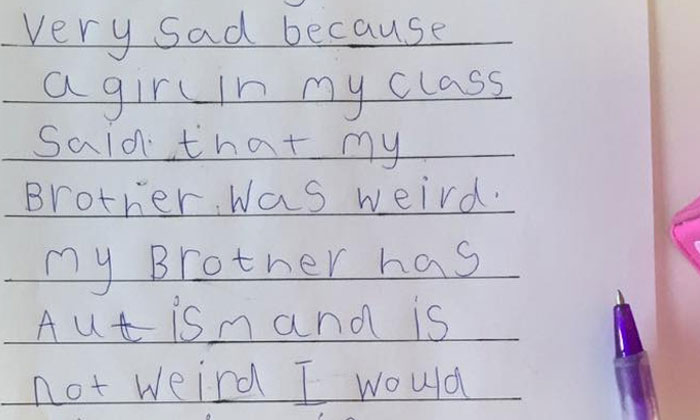 What if someone told you that your autistic brother was weird? Well take a look at how this six-year-old dealt with it.

We sure have a lot to learn from her.

Sophie Camilleri's daughter, Lex, tried her best to explain about autism to the child, but the kid still didn't understand, reported Distractify.

Determined to have everyone understand this special disability, Lex wrote a letter about her brother called "Disability Awareness In Schools" for her next school council meeting.

Mum Sophie later proudly shared the heartwarming letter on Facebook. And in no time, it went viral all over the web.

"On Monday I felt very sad because a girl in my class said that my brother was weird. My brother has autism and is not weird."

"I would like it if we could learn about all disabilities in schools so that everybody understands that some people are different, but we should all be treated the same."

The Facebook post has since been taken down, but according to the site, this was what Sophie's caption read:

"I'm so very proud that Lex has this view and wants to change the way other children view others with disabilities. She is only 6 years old and is already part of the school council, wanting to make this change."

Her letter touched many hearts, and these are what some netizens said:

"I have a brother who has autism too Lex. We're grown-ups now but I still sometimes have to explain to others what makes him so special. Once people understand they behave much better. Sometimes we even become friends. Sometimes they come to like my brother Mark more than me! That's ok. It makes me proud," wrote one commenter.

"Hello, I am a 19 year old autistic and I am happy with your daughters view in life," wrote another. "If everyone could treat us all the same, life would be so much easier. We are still human with strengths and weaknesses just like everybody else. They might not match everyone else's but doesn't mean we are less important," wrote another.

Now, we sure have a lot of learning to do from this six-year-old.