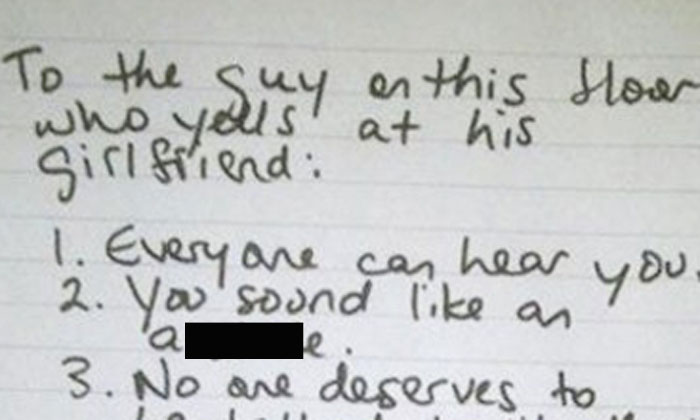 Reddit user j1ggy shared a note posted in the common area of the building where he lives.

The neighbour had apparently had enough of the shouting coming from another neighbour who lives on the same floor.

He decided to just let the whole building know what he really thought about him constantly shouting at his girlfriend.

Other residents of the building obviously agreed, with a few writing that they "liked" his letter, turning it into a real life Facebook post.

Another pasted a post-it on the original note telling the shouting neighbour's girlfriend that she deserved way better.

Several commenters on Reddit applauded the note but added that more should be done.

"Calling the cops would be better than a passive aggressive note.

"Assuming it's constant enough that they wanted to leave a note about it.

"No need to try to interject yourself personally, but a note isn't going to do much and could even make things worse depending on how abusive he is.

"I had an upstairs neighbor a few years ago that I overheard yelling at his spouse once or twice and it didn't seem like anything more than a jerk yelling, but one night it clearly escalated and I could hear him physically tossing her around so I called the cops.

"He was arrested and spent time in jail. From what I know they split up after that and she moved out a few weeks later."

Related Stories
33-year-old punches, kicks and hits GF with hammer in Redhill flat after argument over men
Taiwanese man punches and kicks wife, then threatens to sell off her 3 sons
Father inflicts "gravest form of sexual abuse" on 10-year-old daughter by sodomising her while she was in school uniform
More About:
abuse
relationship
relationships
neighbour
neighbour from hell shouts at girlfriend constantly
rude
letter