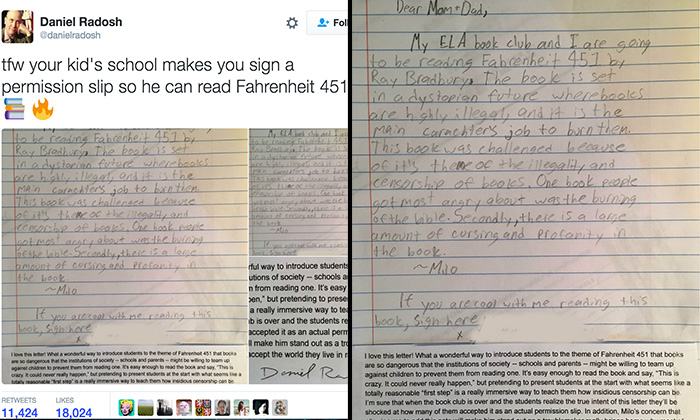 Daily Show writer Daniel Radosh thought it was ridiculous that his son Milo's 8th-grade book club required him to sign a permission slip before being allowed to read 'Fahrenheit 451', and so he wrote back to his son's teacher.

'Fahrenheit 451' is set in a time where firemen actually set fire to books because free thought was a crime punishable by prison, or as one character decided, being burned alive with the books themselves.

Though the book was about the evils of television rather than censorship, it has been embraced as the latter by readers worldwide because of the shocking number of parallels and 'predictions' the book has made since it was first published in 1953.

With that in mind, you can imagine why Daniel thought it was nonsensical that his kid's teacher would require him to sign a permission slip.

The book, as many other classics nowadays, has had some run-ins with parents or community 'leaders' that wanted certain aspects of it changed if their children were to read it.

According to Distractify, 'Fahrenheit 451' is not the first book to receive this criticism, the fear of being sued has clearly done its damage to what is left of the primary and secondary education system in the United States of America.

And so, Daniel did more than sign the letter; he wrote one of his own back to the teacher.

I love this letter! What a wonderful was to introduce students to the theme of Fahrenheit 451 that books are so dangerous that the institutions of society – schools and parents – might be willing to team up against children to prevent them from reading one.

It’s easy enough to read the book and say, ‘This is crazy. It could never really happen,’ but pretending to present students are the start with what seems like a totally reasonable ‘first step’ is a really immersive way to teach them how insidious censorship can be.

I’m sure that when the book club is over and the students realize the true intent of this letter they’ll be shocked at how many of them accepted it as an actual permission slip.

In addition, Milo’s concern that allowing me to add to this note will make him stand out as a troublemaker really brings home why most of the characters find it easier to accept the world they live in rather than challenge it.

I assured him that his teacher would have his back.

Though there was no follow up of what the teacher had to say to the letter, Daniel posted both letters (his son's and his) to his Twitter account, where they went viral.