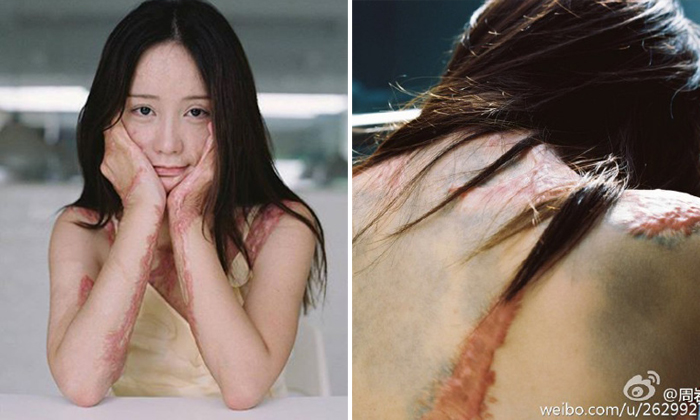 A woman who was set on fire and severely disfigured finally posed for the camera again after five years.

According to Shanghaiist, Zhou Yan recently shared on Weibo a series of photos that showed herself covered in scars and also posted an optimistic poem about overcoming her ordeal.

Zhou's post was met with positivity from netizens, who praised her bravery, beauty and strength as well as cursed her attacker.

Zhou was 17 when she was doused with gasoline and set on fire by a classmate, Tao Rukun, in 2011 for rejecting his romantic advances.

They had studied at the same school in Hefei, Anhui.

Zhou's parents had even arranged for her to transfer schools so as to avoid Tao, after she turned him down several times.

In retaliation, Tao went to the girl's home and set her aflame, causing her to suffer second and third-degree burns that covered more than 30% of her body.

Reports said that Tao's parents, who were government officials, had initially refused to fork out money for Zhou's medical fees unless her family signed a document that called for their son's release.

However, instead of the 4.67 million yuan that Zhou's family had asked for in compensation, the court only granted them 1.72 million yuan.

Both sides appealed the verdict as the victim's family felt that the amount was too little while Tao's side found it too much.

In March of this year, the court ruled that the compensation should be slightly increased to 1.8 million yuan ($277,000).

Upon finding out that the amount had only increased by 80,000 yuan, Zhou fainted in front of the court.

She currently has 200,000 followers on Weibo, where she posts updates about daily life.

Related Stories
Shaanxi woman divorces paralysed husband and marries his friend -- but it's not what you think
US woman allegedly hits boyfriend with car after learning he is HIV-positive
Jilted BF ties ex-GF up and cuts her with knife in Choa Chu Kang flat
More About:
China
couple
dispute