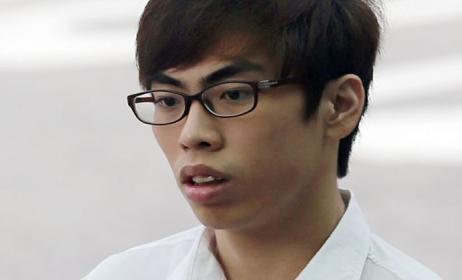 Upset that his girlfriend had left him, a student threatened her and made her follow him to his flat, where he tied her up with cable ties and cut her wrist and arm with a knife.

But he later apologised and broke down before releasing her.

The girl made a police report the next day about the incident, which happened on Nov 11 last year.

She was given a day of medical leave.

On Monday, Trevor Chang Jun Kit, 19, was given two years' probation for wrongfully restraining the girl and voluntarily causing hurt to her with the weapon.

One count of being in possession of the knife was also taken into consideration during sentencing.

The court heard that the girl, also 19, was on her way to school at around 8.45am on Nov 11 last year when Chang approached her near her block.

He told her that he was armed with a knife and asked her to follow him.

Afraid, the girl did as she was told and walked with him to his flat at Block 208, Choa Chu Kang Central.

When they reached the unit about 30 minutes later, Chang took her to his room and used cable ties to secure her hands at her front.

He also used them to secure her legs together.

Chang used masking tape to cover her mouth before using a flick knife to slit her wrist. But he later removed the tape and asked her if she would get back with him.

He also asked the girl about her relationships with other people.

After a while, Chang removed the cable ties from her hands, but instead of letting her go, he secured her hands at her back.

The girl refused when he asked if she would get back together with him. She said it was impossible between them, but added that they could still be close friends.

Upon hearing this, Chang broke down, apologised to his ex-girlfriend and cut off all the cable ties.

After he calmed down, she told him she needed to go to school and they left his flat together at around 2pm.

She made a police report the next day.

For wrongfully restraining the girl, Chang could have been jailed up to a month and fined up to $1,500.

For voluntarily causing hurt to her, he could have been jailed up to two years and fined up to $5,000.