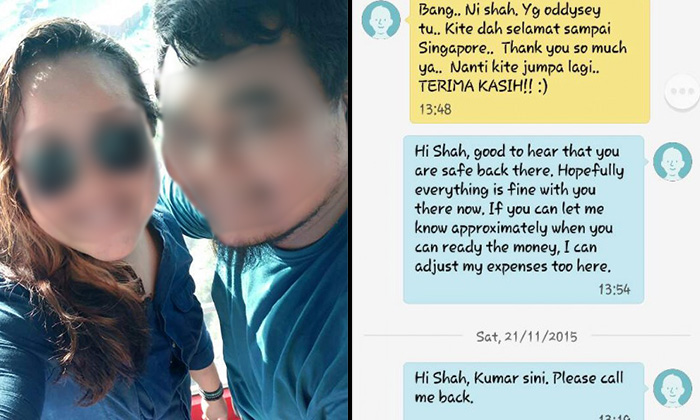 A Malaysian has responded on Facebook to highlight that the girlfriend of the Singapore guy who did not return his towing fees has agreed to pay back the owed sum.

Sharvin Kumar had originally voice his disappointment after allegedly being cheated by the Singaporean couple.

After the post went viral, he first replied in the comments that the guy's girlfriend had first contacted him to say that she did not know that her boyfriend had not repaid the amount.

She also told him that she would make a report about the incident, prompting him to do likewise.

Shortly after, he posted another comment to say that the woman has contacted him and agreed to repay the towing fees.

Sharvin thanked everyone for making his post go viral, and admitted that he did not have hope of getting his money back.

He said he had the post to warn others, and getting his money back was an unexpected surprise.

The Malaysian had posted about the incident, that happened on Oct 04 2015, on the Singapore Scams Discussion Facebook page.

Sharvin detailed that he had chanced upon a Honda Odyssey parked by the road near Petronas Jalan Bukit Chagar.

He stopped his car, and saw a Malay couple standing next to the Singapore-registered car.

"The guy's name was Mohd Sharel and the girl was Syazwani if I'm not mistaken," said Sharvin in his post.

"According to them, he worked as a bouncer at an Indian pub in Singapore and lives in Jurong.

"After talking to them, they said they just bought a new battery for the car but before going into Singapore, the car broke down.

"Even after trying to jump start several times. After several workshop guys came to see, they mentioned to bring to workshop to diagnose the car.

"Almost one hour plus I was with him to figure out a way for him.

"He said he wants to tow the car back to Singapore since he bought this car from a used car dealer recently so they provide warranty but he has no money and no one is answering his call to help.

"I called a friend of mine who does towing services and asked the price to tow back to Singapore. It was RM750.

"He asked if I could help him to pay first and then later after a week he will come back Johor Bahru to pay me.

"Out of goodwill I paid but almost one year now and there's no news.

"He is still using the same number, he answers but he acts as if he doesn't know me.

"Attached some pictures. Just be careful with both of them. Please share the post to create awareness."