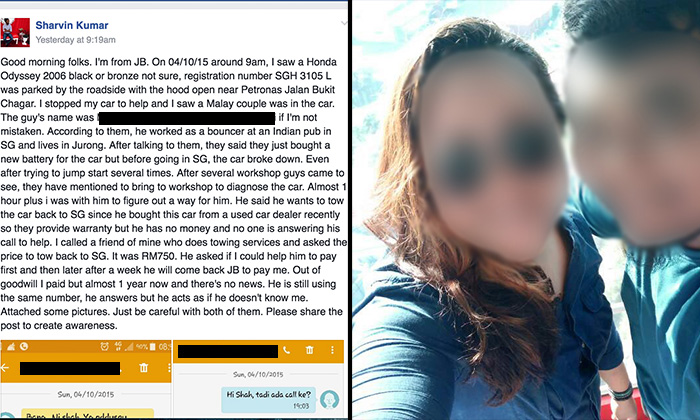 A man in Johor Bahru apparently helped a Singaporean couple to pay for their car towing service, only to realise he is probably never going to get his money back.

According to a Facebook post, Sharvin Kumar was travelling near Petronas Jalan Bukit Chagar in Malaysia on Oct 4 when he stopped to help the couple whose car had broken down.

Several workshop men came over to see and concluded that the car had to be brought to a workshop.

Sharvin stood with the couple for over an hour, hoping to help figure out a way for the man and woman.

"The man said he wanted to tow the car back to Singapore since he had recently bought this car from a used car dealer that provides warranty, but he had no money and no one answered his call to help."

Thus, Sharvin called his friend who does towing services and asked for the price to tow back to Singapore.

"The man asked if I could help him to pay first and said he would come back to JB to pay me a week later. Out of goodwill, I paid, but it's been almost a year now and there is still no news," added Sharvin.

Sharvin notes that the man is still using the same number and replies to texts answers, but acts as if he does not know him.

Related Stories
Cyber security expert tracks down scammer’s family on FB -- and gets desperate apology in 10 mins
Loanshark attempts to scam Stomper by threatening to rape him and kill his family
S’pore guy shocked to get notification that his Paypal account was accessed from New Zealand
More About:
Malaysia
singapore
scam
couple