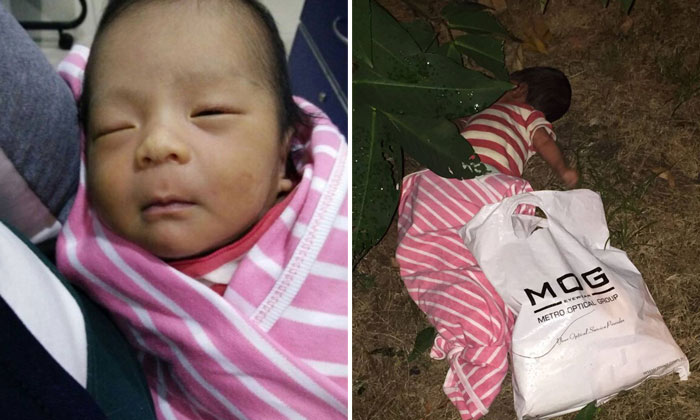 According to SJ Echo, the infant was found laying in the bushes  fully clothed and wrapped in a cloth -- by an Uber driver who had dropped off a passenger in the area a little after midnight.

At around 12.33am, the district police officers were alerted to the situation and were immediately dispatched to the area.

"The Uber driver had just dropped off a passenger at Casa Tiara Apartment. He then heard sounds of a baby crying when he winded down his window.

"Upon finding the infant in the bushes, he immediately called the police."

Mohammad Azlin said the infant was brought to the SS17 police station while an ambulance was called to assist.

"As it was about to rain at that time, we brought the baby to the police station," said Azlin.

He has since been brought to Universiti Malaya Medical Centre.

"The baby's umbilical cord has dropped off and he weighs around 2.85kg. There is some bruising on his left hand but we are not sure if it is an injury or a birth mark at this point."

Due to the above reason, it is also difficult to determine the race of the child. The police however found a towel which had the words "PPUM" on it -- concluding that it belongs to a hospital.

In a plastic bag found next to the baby, there were diapers, baby shampoo, milk and a baby bottle. No documents were found in the bag.

Unfortunately, there were also no CCTVs in the area to aid in the investigations.

Azlin urges members of the public to contact the police immediately should they have more details of the incident.