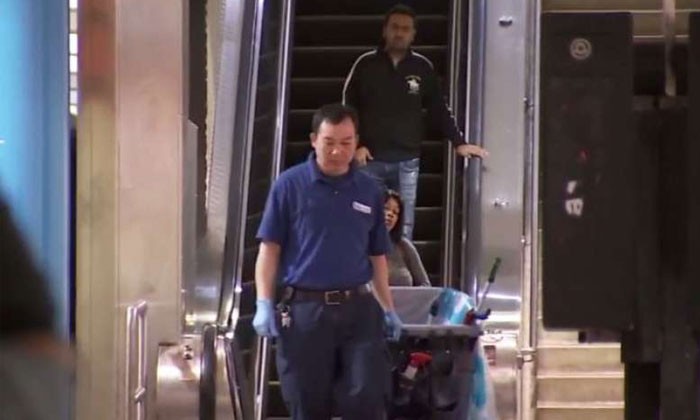 A US transit system janitor who caused an uproar over his excessive salary has been caught hiding in a closet during his work hours.

The sum includes his basic salary of US$57,945 and an additional US$162,050 in overtime pay, public records released by non-profit organisation Transparent California showed.

He was also paid every single day, including weekends, for the whole of 2015.

KTVU, which recently went through two days' worth of surveillance footage from Bart's security cameras, discovered that Mr Liang frequently visited a storage closet in the station.

He would spend up to 90 minutes in the closet several times a day.

When asked, Mr Liang said he was taking his lunch break, although Bart said its employees eat their lunch in a break room and are only given 30 minutes for meals.

Speaking to KTVU, Bart's chief transportation officer Roy Aguilera said it was possible for Mr Liang to earn so much by doing overtime.

Mr Aguilera said Mr Liang had never refused extra work, and that the station's large population of homeless people meant that janitorial staff spend much of their time cleaning up urine, faeces and needles.

"People are not raising their hands and saying, 'I want some of that overtime. He has said yes. He's worked hard, he's completed the assignments, so I stand by the work he's done," he added.

He said: "It's absolutely outrageous. For janitors that's obscene! It's unconscionable."

On the possibility that Mr Liang had worked every single day in 2015, Mr Fellner joked that he was "superhuman".

According to Transparent California, there were at least 49 other janitors who earned over US$100,000 in 2015.