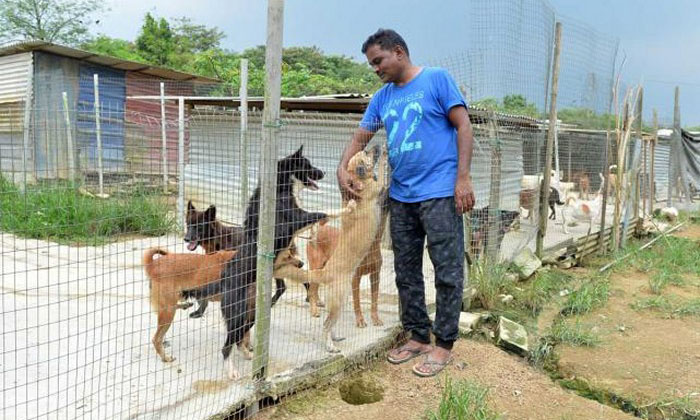 Singaporean S. Loga­nathan left behind a good-paying job and crossed the Causeway to help save stray dogs for the past five years.

“My wife is my biggest inspiration and it’s because of her that I become a dog lover myself as she also helps rescue stray dogs in Singapore.

“Both of us are working hard to make sure that the strays that we rescue have a comfortable life in our shelter located at Bukit Tiram here,” said the 49-year-old former teacher.

Since the shelter was set up, the number of dogs kept increasing and it currently stands at more than 500, Loganathan said.

He said the dogs received regular medical attention from a private veterinary clinic and plenty of food, reports The Star.

“For those wanting to adopt dogs, in particular puppies from us, I will usually advise them to make sure that they are ready to take on such a responsibility as I hate to see the animals back on the streets,” he said.

Loganathan also received help from the Johor Baru City Council in his rescue work as the local autho­rity usually informed him about stray dogs within its jurisdiction.

“People tend to point the finger at the local council when their officers take action against stray dogs, but they are only doing their job.

“Irresponsible pet owners that do not neuter their dogs are the ones to be blamed as they will usually dump the animal when it starts breeding. I have come across many cases like that,” he said.

Loganathan, who has been working part-time as a security supervisor in Singapore to maintain the shelter, said the Esa Animal Shelter needed at least RM24,000 a month for its operations, including sending the dogs for medical check-ups.