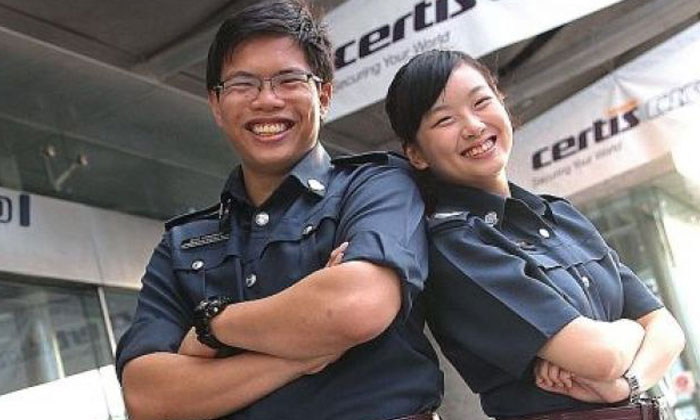 He dropped out of Temasek Polytechnic at 19 and thought he could make a living as a guitar instructor.

But Mr Muhammad Eirwannor, now 25, quickly realised he could not make ends meet.

As he looked for options to resume studying again, he found out about Certis Cisco Security's partnership with Republic Polytechnic (RP) in the work-study scheme.

It is a fully sponsored part-time diploma course that gives Certis Cisco's auxiliary police officers (APOs) the best of both worlds: to work as an APO while studying.

They also enjoy the staff benefits of a full-time employee.

Mr Eirwannor said: "I was a poly dropout and I thought I didn't need a diploma. But I soon realised I needed to study again.

"The work-study scheme allows me to study two days a week, and three or four days will be work days. We do 12-hour shifts and it's very flexible. People ask me if it's hard to cope, but it's actually quite easy."

The 2½-year diploma course took in its first cohort on Oct 5. Its second intake will be in April 2017. They are currently accepting applications.

Applicants can pursue diplomas in subjects such as hospitality and engineering.

Students have to complete a seven-week stay-in training ﻿stint and a typical training day consists of physical training and security lessons.

There will be opportunities in career progression, overseas exposure and job rotation in other positions within Certis Cisco.

Mr Eirwannor, who is in the Tuas Checkpoint division doing security checks, said: "Security and policing came naturally to me as I was under the public affairs department for the Singapore Police Force during national service."

He said he appreciated the on-job training as it gave him work experience.

He was previously posted to the Changi Airport division, doing access control.

"I'm thankful to Certis Cisco that I get to go back to school and work at the same time," he said. "I can see myself in this career line for a long time."

Miss Cheryl Tan, 20, is another Certis Cisco APO in the work-study scheme. She said: "I never expected that this would be my career now.

"People think this job is not suitable for females. At one point, I was quite affected by this.

"But luckily, my family is supportive because I am sure of this as my own career and future and I have no regrets."

Miss Tan, who was from the Institute of Technical Education, said she found skills such as customer service and patrol duty to be helpful.

She said: "Whatever I learn now is relevant to what I'll be doing in the future. I like helping people out while maintaining the security in Singapore."

Mr Albert Toh, director of the Academy for Continuing Education at RP, said that the work-study scheme helps "individuals to stay current, relevant and improve their lives".

Miss Ivy Oh, vice-president of group human resources at Certis Cisco, said: "We welcome all suitable candidates who are eager to benefit from this scheme to gain practical experiences while seizing the opportunity to study and to continuously upgrade themselves as meaningful individuals."

The APOs who are on this work-study scheme have a two-year bond with Certis Cisco after they graduate from RP.

Those interested in applying for the Certis Cisco's work-study scheme with RP may visit www.certissecurity.com/wss for more information.

5 misconceptions about being an auxiliary police officer

1. It's for older people

More than 60 per cent of auxiliary police officers (APOs) are 18 to 35 years old.

2. It's boring and not challenging

APOs perform policing duties that require them to be on their toes and vigilant at all times. They need to manage the public, think on their feet and react to different situations that may arise on the job.

3. It's poorly remunerated and has no benefits

The pay package of APOs was adjusted in June this year to be even more competitive in the market, and new joiners enjoy a joining bonus of up to $15,000. They also enjoy a full range of staff benefits from medical insurance, to free corporate passes or tickets to tourists attractions in Singapore.

More than half of the local auxiliary police force are Singaporeans, said Home Affairs Minister K Shanmugam during the Committee of Supply debates in Parliament on April 6. He was responding to queries from Member of Parliament Sylvia Lim on the proportion of Malaysians to Singaporeans in auxiliary police units such as Certis Cisco and Aetos.

5. APOs are more suitable for men.

Everyone, men and female, has equal opportunities for career exposure and career progression.