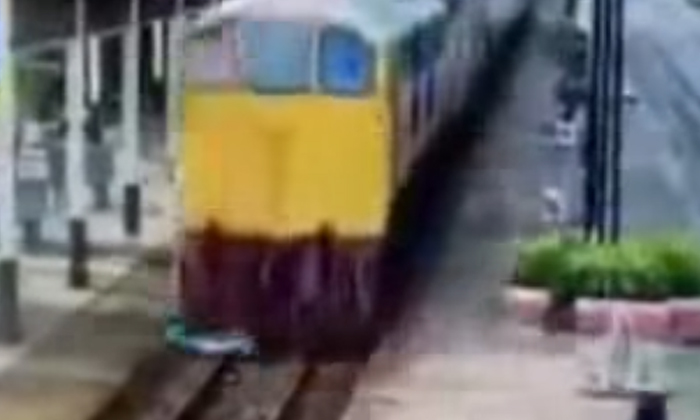 A horrifying footage has emerged on the Internet showing a man lying down on a railway track as a train ran over him, before he miraculously walked away unscathed.

The incident happened at Bangkok’s Phetchaburi station yesterday where CCTV footage showed the man later identified as Wirachai Nisairam, running out onto the train track when he saw the train approaching the station.

In the video below, Wirachai Nisairam, who was seen wearing a green shirt, ran out and lay down on the train track as soon as he saw the train arriving, Asian Town and World of Buzz report.

When the people around him realised what he was trying to do, they quickly moved away.

Some even shielded their faces in horror from the seemingly inevitable gory scene that they thought was about to unfold before their very eyes.

However, much to everyone's surprise, Wirachai Nisairam miraculously got up and walked away from the train station.

Soon, police officers and medics arrived on the scene and found him sitting nearby.

He was eventually sent to the Phra Jorm Klao Hospital for a thorough check and he was found to only suffer a slight abrasion on his leg with no internal injuries.

The doctors later assessed that Wirachai Nisairam was suffering from depression.

It was also reported that some of the locals noticed him wandering around a few days ago and had attempted to harm himself.

Wirachai Nisairam was often heard muttering that he could not find a job and was stressed out.

Related Stories
18-year-old student attempts suicide in Hong Kong after getting raped by Tinder date
Cop dies, another seriously injured jumping out of windows to escape khalwat raids in KL
Woman stabs BF after he gets cold feet in 'Romeo and Juliet' suicide plan in Malaysia
suicide attempt
near-miss
near accident
horrifying