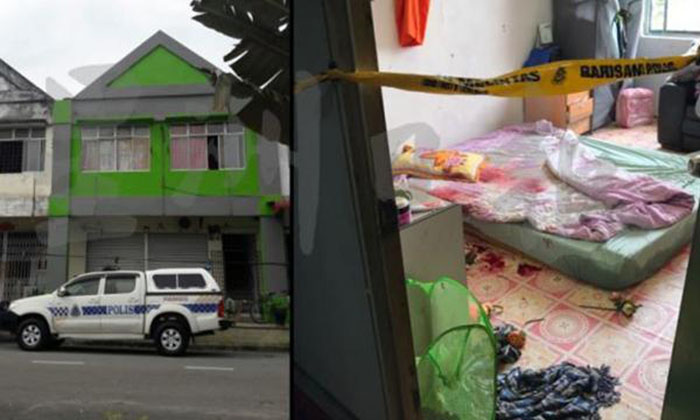 It was supposed to be a tale of two lovers ending their lives together like 'Romeo and Juliet', but the man got cold feet and was stabbed by his girlfriend as a result.

The incident, which happened at a neighbourhood in Ulu Tiram, Johor, on Friday at 2:30am, soon turned into a fight, ending with the death of the woman, a 28-year-old Filipina, reported China Press.

Both the woman and her boyfriend, a 27-year-old Bangladesh national, were found lying on the bed, with bloodstains all over the room.

The deceased was found bleeding on the forehead and had knife wounds on her back, reports The Star.

It was believed that both of them had agreed to drink a bottle of liquor laced with poison, in which the woman took the lead.

When it was the man's turn to drink the poison, he decided he could not go though with it.

In a fit of rage, the woman stabbed him in the abdomen.

They were discovered when the man, a former security guard, made a phone call to his ex-employer, pleading to get his job back.

The employer noticed the man behaving strange during his phone conversation, which prompted him to make a police report.

An ambulance arrived at the scene at 7am, with the man brought to the hospital for treatment.

A neighbour revealed that the man had stayed at the same place for seven years and is known to have had several girlfriends, reported Kwong Wa Yit Poh.

The Filipina is believed to be his most recent lover.

The neighbour, said the man did not speak much but smiled and greeted him whenever they met.

As at press time, the Johor Bahru police have yet to comment on the incident, the daily reports.