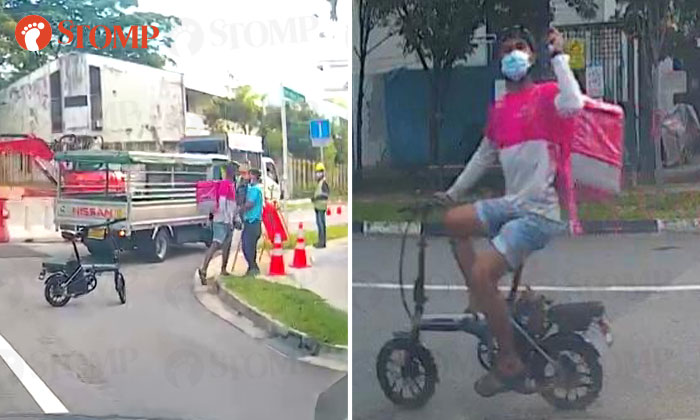 A Foodpanda rider was seen confronting a worker at Jervois Lane on Thursday (May 6).

A Stomper alerted Stomp to the incident he witnessed at about 4.50am.

In a video he shared, the rider is seen gesturing and shouting at the worker before getting closer and eventually shoving him.

"I happened to pass by this route when I saw the Foodpanda rider approaching a worker quite fiercely.

"I drove forward and saw him scolding the worker non-stop and pushing him.

"I tried stopping the rider and told him to just move on.

"The worker was just trying to guide the traffic because there were some construction works going on.

"The rider refused to listen and kept shouting at me, telling me to 'f*** off'.

"I told him again that if he was not going to stop this nonsense, I would call the police.

"Shortly afterwards, he rode off."

The Stomper said he talked to the worker who explained that the rider was going very fast and had told him to slow down but he allegedly refused to.

"He got angry and started scolding and attacking this worker," said the Stomper.

"Come on! These workers are just doing their jobs, nothing wrong.

"I'm not against anyone.

"Everyone is equal and no one has the rights to push anyone like this.

"Moreover, it's just a small issue.

"You can see from the video that the worker was trying to walk away and didn't want to create any trouble."