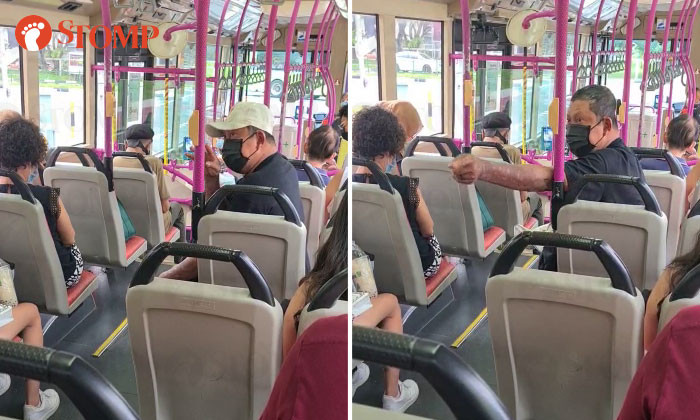 A man was caught on video scolding a young couple for purportedly hugging and holding hands on a bus on Wednesday (May 5).

A Stomper told Stomp he was on bus service 69 when the incident happened and shared a video he took.

In the video, he is heard scolding the couple in Malay and saying: "Sit still, it's fasting month."

Other commuters are heard telling the couple to say sorry and asking the uncle to "give chance" because they are "still young".

The man then repeatedly asks the bus driver to call the police.

"This uncle scolded a couple of students for hugging and holding hands on the bus," the Stomper said.

"Other passengers tried to calm him down and even asked the students to say sorry to him.

"Despite that, the uncle still continued to scold them until they alighted from the bus."

Related Stories
Cyclist rages at driver after failing to dismount or slow down at Fernvale zebra crossing
Cyclist rides up to confront driver who honked at him
Dispute breaks out at Little India coffee shop
More About:
dispute
uncle
PDA
scold
Bus