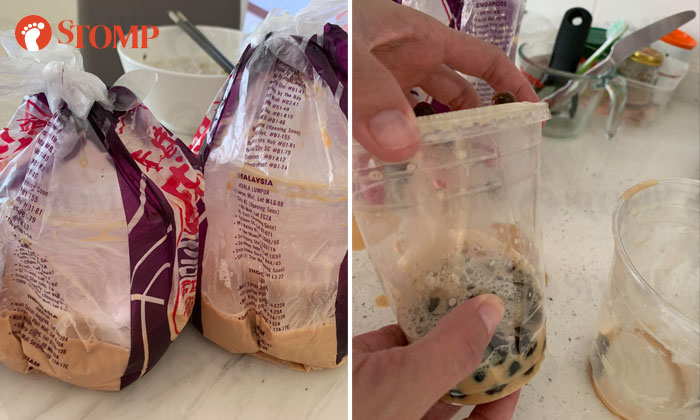 Foodpanda has apologised after one of its customers was dismayed to receive bubble tea from Sheng Kee Dessert with almost no drink left in their cups.

Stomper NS shared with Stomp that he had ordered two cups from Sheng Kee Dessert at IMM in Jurong East on May 17.

"When the drinks arrived, the drinks were almost entirely spilt," he said.

"There was less than 20 per cent remaining in the cups."

Upon closer inspection, he noticed there were cracks in the cups.

"Sheng Kee Dessert used extremely thin plastic cups that cracked open easily, leaving the drinks exposed to contaminants the entire route from the collection point to my house," he said.

"They also did not seal the cup or have stickers on the cups to state the time of preparation or instructions on what time to consume the drinks by."

In response to a Stomp query, a Foodpanda spokesman said: "Foodpanda would like to apologise for any inconvenience caused.

"We will work with our restaurant partner and rider to investigate this matter, and ensure that the necessary steps are taken to prevent similar incidents moving forward.

"We would like to encourage our customers to get in touch with us at support@foodpanda.sg with their details so we may be able to assist with their feedback, requests and refunds."

Stomp has also reached out to Sheng Kee Dessert for comment.