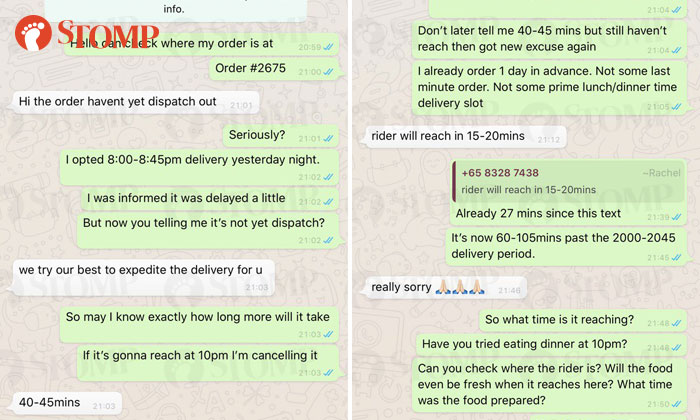 Imagine having to wait for over two hours for dinner you had ordered in advance. Disappointment is an understatement.

Stomper Benjamin had placed an order for over $100 worth of sushi from Sushi Delivery on Friday (Apr 17) to arrive the next day (Apr 18) at 8pm.

He started to grow concerned when by 9pm, there was no sign of his dinner.

According to Sushi Delivery's website, they promise to deliver orders within one hour.

After checking on the status of his order at 9pm, he was shocked when the company replied his meal had not yet been dispatched.

He was prepared for it to be delayed but did not expect that it had not even been sent out after an hour.

However, there was still no sign of the food.

Although hungry, Benjamin and his family had no other options but to wait for the food.

"The food was room temperature when it arrived," he said.

"The excuse given was that they were 'overwhelmed by orders'.

"I tried to leave a review on their Facebook page twice but they got deleted within 10 minutes.

"I was unable to leave a review on their website either.

"They can monitor their Facebook and delete reviews so fast but their delivery can take more than two hours."

Benjamin told Stomp he was offered $10 off his next order because Sushi Delivery failed to deliver on time.

"There won't be another order," he said.

Related Stories
'My food was marked delivered even though no one rang doorbell -- and I was horrified to find this'
Batam resort responds after guest's disappointing stay, "worms" in cot and biscuit chunks in baby chair
Pizza Hut investigating after woman allegedly gets burnt pizza in 'mouldy' box
More About:
food delivery
Sushi
bad service
review