GrabFood apologises for failing to deliver Mother's Day orders, even those made in advance 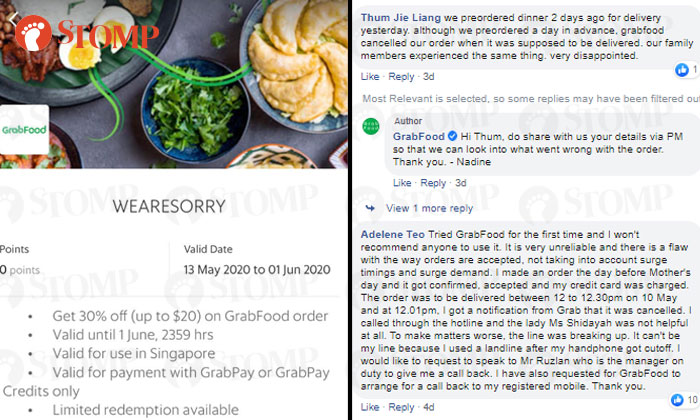 Grab has apologised after several customers were left disappointed when their deliveries were cancelled following a large spike in orders on the platform and an unexpected technical glitch on Mother's Day (May 10).

Stomper Charles was one of those affected and shared with Stomp his disappointment.

"GrabFood had promoted various deals and promotions for delivery of meals to celebrate Mother's Day," he said.

"However, despite pre-booking, many customers had their orders unilaterally cancelled by GrabFood after the scheduled delivery time.

"I ordered a meal from Soi Thai Kitchen at about 2.50pm to be delivered between 5.45 to 6pm, and this was accepted by GrabFood.

"However, GrabFood cancelled my order at about 6.10pm."

Charles added he was only able to get through to a customer service officer via their hotline after about 19 tries.

After making further complaints, he was eventually given a voucher for 30 per cent off his next order (up to $20).

"This fails in any way whatsoever to make up for the disappointment caused to my family.

"A lot of customers have faced the same problems."

Indeed, according to comments left on a post on Grab's Facebook page, Charles was not the only one. 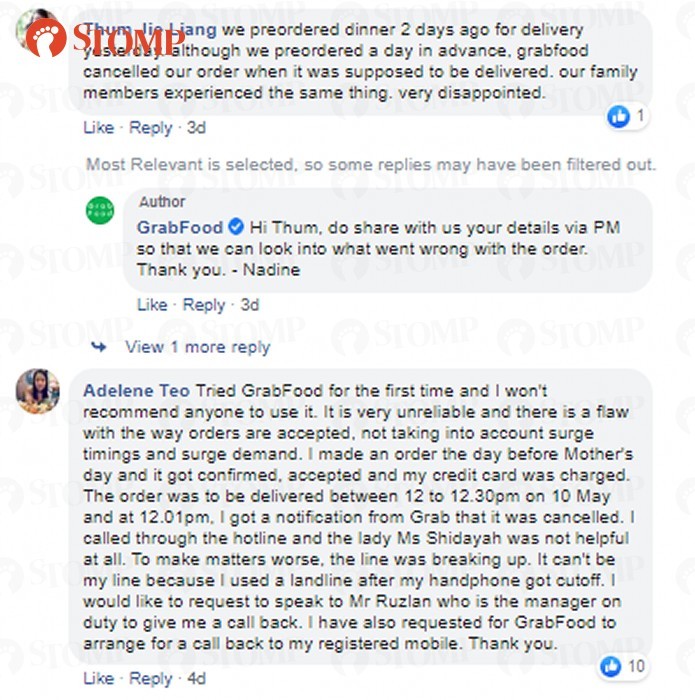 Stomper NS shared with Stomp his own experience after ordering a meal from Dian Xiao Er at Jurong Point via GrabFood.

He had also made an advanced booking to be delivered on Mother's Day at 5pm.

"The GrabFood app showed the order was being prepared at 4pm," he said.

"At 7pm, two hours after the expected delivery time, the food was still being prepared according to the app!

"We called up GrabFood to enquire about the status of the order and learned that Dian Xiao Er had shut down its outlet operations for the day.

"GrabFood offered to cancel the order so at 7pm, with no dinner for our mum and starving children, we had to go out and purchase food at the nearby coffee shop which was ridiculously overcrowded by then."

"Dian Xiao Er was uncontactable throughout. They refused to answer the phone or reply to messages sent to their Facebook page."

The Stomper shared screenshots of comments from other customers who had also ordered from Dian Xiao Er and were left waiting for food that would never come. 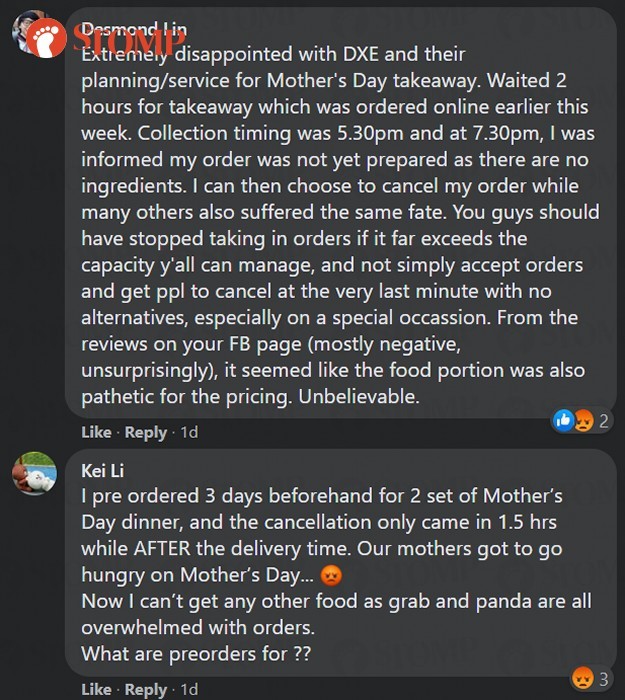 In response to a Stomp query, a Grab spokesman said:

"On Mother’s Day (10 May), GrabFood experienced a large spike in food orders on the platform.

"The glitch has since been fixed.

"We understand that Mother’s Day is an important occasion and we sincerely apologise for the inconvenience and disappointment caused."