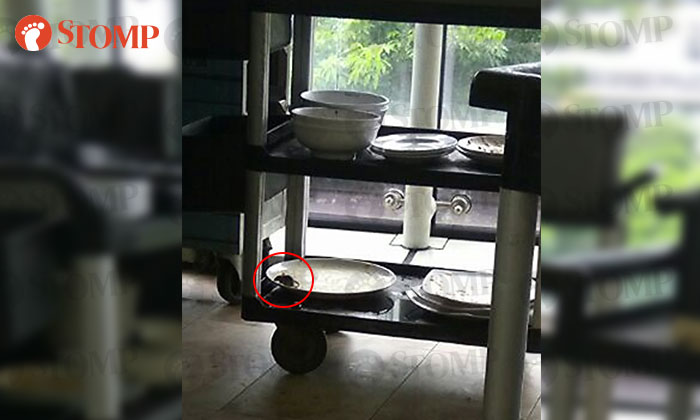 Stomper Sharifa was having a drink at the Food Republic @ City Square Mall on Friday (Dec 8) at around 4.03pm, when she spotted a rat on some plates that were placed on a trolley.

She approached a cleaner to tell her about the rodent, but according to Sharifa, the cleaner simply smiled at her.

Sharifa, a regular patron of the foodcourt, told Stomp: "Spotted a small rat licking the plates in the trolleys that belonged to Food Republic at City Square Mall.

"I’m disappointed in the hygiene of the restaurant."

Asked whether she would visit the foodcourt again, Sharifa laughed, saying: "Probably not.

"It’s a little awkward now to go back. Whenever I buy something, I’ll be reminded of the rat."

In response to a Stomp query, a spokesman for Food Republic said that it takes the matter of hygiene very seriously, and a regular pest control vendor comes in once every fortnight to all outlets to conduct 'thorough cleaning and checks on the premises'.

"The last pest control service was carried out on 5 Dec 2017, (four days before the sighting) and the report showed "no or low risk of pests including rodents, flies, and cockroaches.

"However, we have continued with our routine of implementing pre-emptive steps which include the application of rodent glue boards and pests adhesive boards.

"Operations at the outlet have continued with minimal disruption to service.

"We are working closely with our landlord’s building management team to ensure a clean and safe environment at the Food Republic outlet in City Square Mall.

"We wish to assure our customers that we take this matter very seriously and have stepped up our pest control efforts.

"We have deployed our regular pest-control services to come in on a weekly basis instead of bi-weekly."

Related Stories
Woman joined by army of cockroaches, rats and centipedes at Thai market -- but keeps on eating
Boon Lay HDB resident catches rat after it invades his dining hall and kitchen
Not again! Rats back in Bukit Batok, raising fears of repeat of infestations in 2014 and 2016
More About:
hygiene
Foodcourt
rats