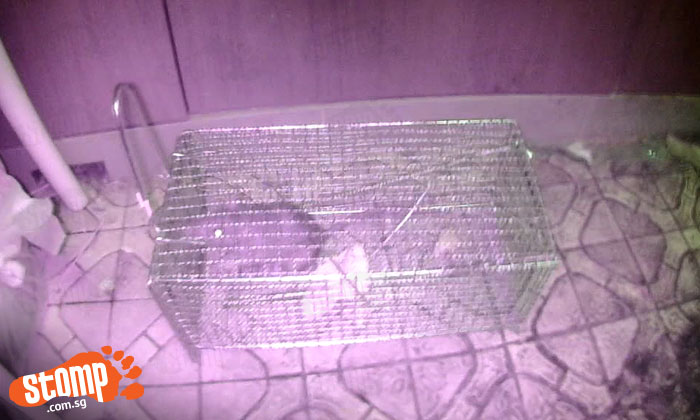 Stomper Nuh was shocked when he discovered that his home at Block 209 Boon Lay Place had been invaded by a rat.

He had first caught sight of something "big and black" scurrying across his kitchen on May 3 and told his mother that it could be a rat.

"Thereafter, I heard heavy rustles, unlike those made by house lizards and cockroaches, and biting of paper or plastic at the dining table but found nothing every time I moved to look," said Nuh.

On May 4, at around 2pm, he heard the same sounds and saw the rat climbing down from the table.

However, it disappeared from sight as Nuh reached for an umbrella.

He finally managed to capture the rat just after midnight on May 5 and trapped it in a rat cage but he remains worried:

"I read and watched videos about how rats could enter homes by climbing up water outlets. But I am still very puzzled how a rat could get into an HDB flat. It's worrying because I thought rats live in packs.

"There has been no catch since May 5 but the cage and glue trap are still open.

"This is the first time in my life I have experienced this."

He has since reported the issue to his local town council.

Related Stories
Not again! Rats back in Bukit Batok, raising fears of repeat of infestations in 2014 and 2016
Shopper shocked to see large rat in bread stand at Bedok North convenience store
Is that a gigantic rat scurrying around Clementi Avenue 3 block? Not quite
pest
pests
rat
rats
infestation
trapped