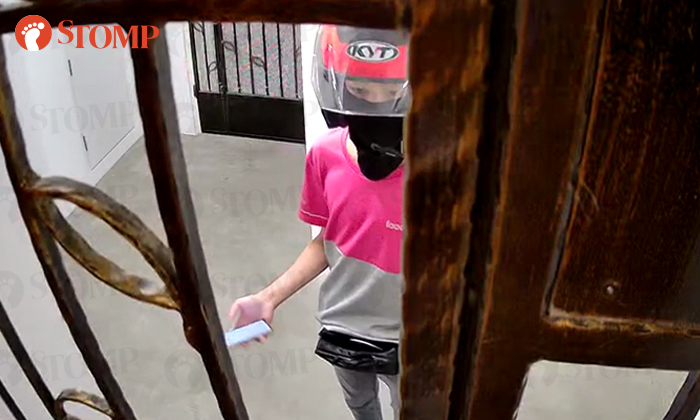 What could have been a smooth food delivery ended up with both the customer and the deliveryman accusing each other of displaying poor attitude.

Stomper S, a resident at Canberra Crescent, had ordered food from a restaurant in Yishun via Foodpanda on the night of October 26.

S, who shared CCTV footage of the incident, recounted: "I ordered from Foodpanda and the delivery rider had not arrived at my doorstep.

"However, the food was marked as delivered when I checked my phone even though I hadn't received it, and I started to become confused.

"The delivery rider arrived at 8.28pm and I was not happy as I initially thought my food was missing in action.

"I then opened my gate to pass him the money and collect my food.

"When I closed my gate, I looked at him. The rider was staring at me in anger and asked me, 'Why you like not happy like that?'

'I replied, 'You shouldn’t click 'delivered' on the phone before arriving at my doorstep as I thought my food was missing.'

"He replied, 'I send you food, you show me this type of attitude ah.'

"I replied that he was the one showing me attitude and told him not to be so rude.

"I scolded him back 'idiot' as well.

"I ordered food but didn't even have the mood to eat anymore because the deliveryman had scolded me for no reason."

S said she subsequently emailed Foodpanda to lodge a complaint, but was not satisfied with the response that she received.