Florist company and customer hurl F-word at each other after complaint over $74.50 bouquet 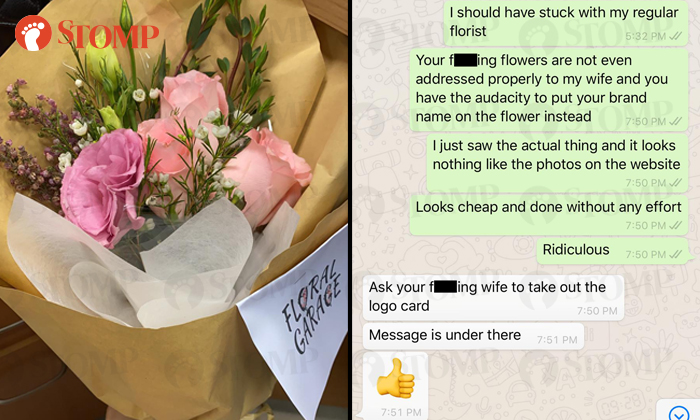 Update on Feb 18: After hurling F-word, Floral Garage shuts down another customer who received rotting roses

A florist company got into a heated exchange with a customer after the latter complained about the unsatisfactory bouquet that he had ordered for Valentine's Day.

Stomper Duckben said he ordered a Signature Freestyle Bouquet from Floral Garage Singapore and paid $74.50, including delivery, for it.

He requested for the bouquet, which was accompanied by a personal message from him, to be sent to his wife.

However, Duckben said that the "terrible customer service" and disappointing bouquet spoiled his wife's first Valentine's Day as a mother. 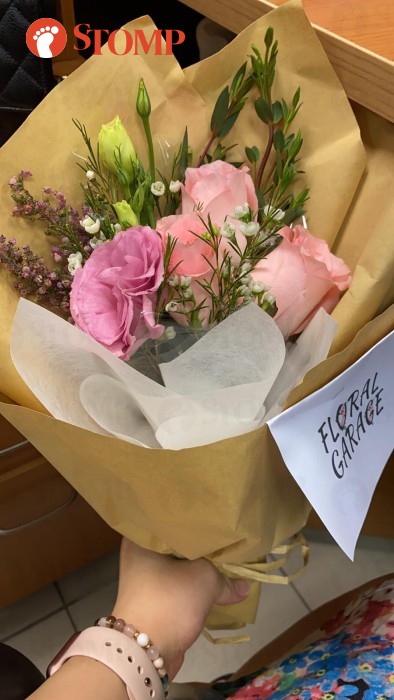 (A photo of the bouquet that Stomper Duckben's wife received)

According to Floral Garage's website, the Signature Freestyle Bouquet "is the best bouquet for you if you do not know what to get this Valentine’s Day".

Customers can choose the colour theme (red, pink or pastel) and style (modern or rustic) of the bouquet, but any other customisation is not allowed.

The bouquet listing is accompanied by various pictures that "show just some of our completed Freestyle Bouquets". 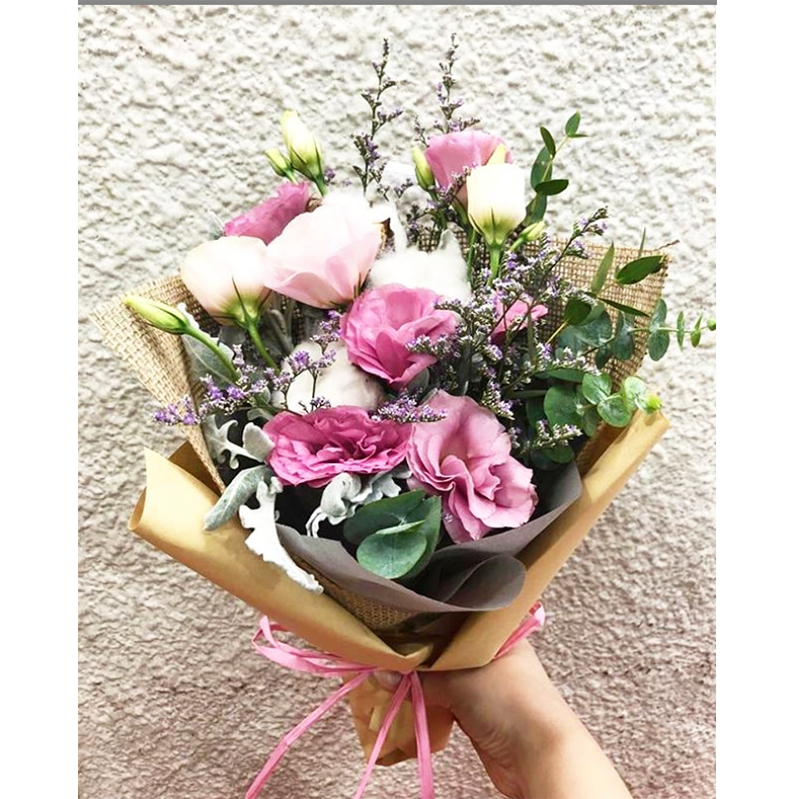 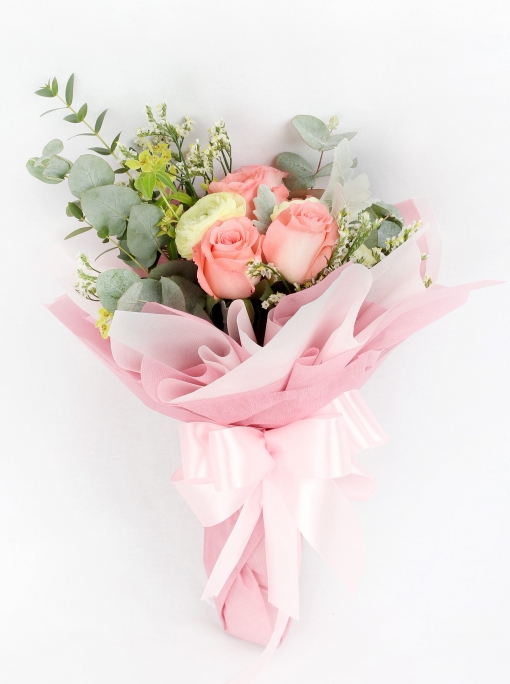 Besides dissatisfaction over how the bouquet turned out, there was also confusion over the card that was supposed to contain Duckben's message to his wife.

Duckben told Stomp: "As you can see, what I ordered was completely different from the pictures.

"I also had to tear the card out from the bouquet in order to see the message. In the process, the card had a hole and the wrapping was torn."

Duckben had contacted Floral Garage on WhatsApp to ask where the message card was. 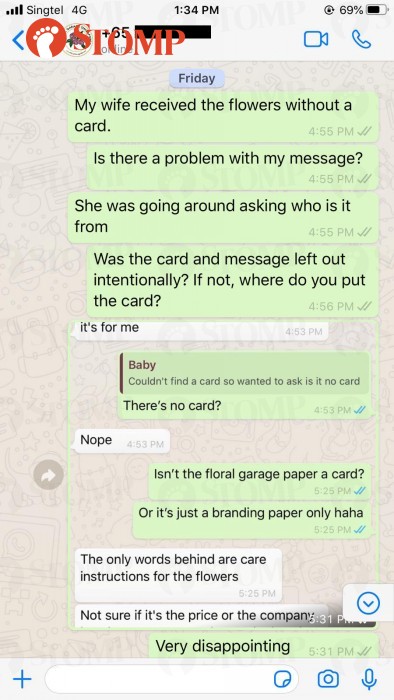 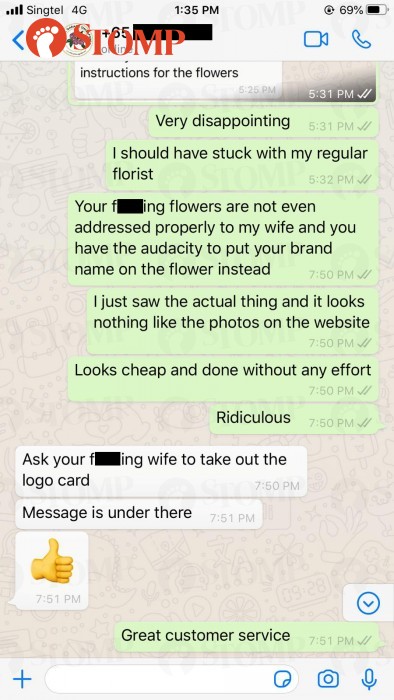 In screenshots that Duckben shared with Stomp, he can be seen complaining that the 'f***ing flowers' were not properly addressed to his wife.

He also said that the bouquet "looked cheap and done without any effort".

This prompted Floral Garage to respond, "Ask your f***ing wife to take out the logo card, message is under there" with a thumbs-up emoji. 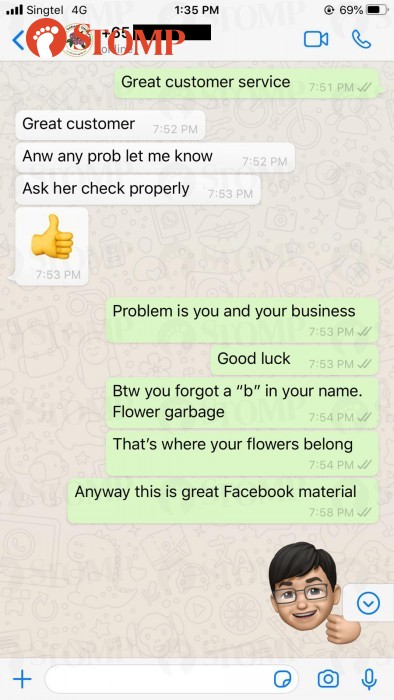 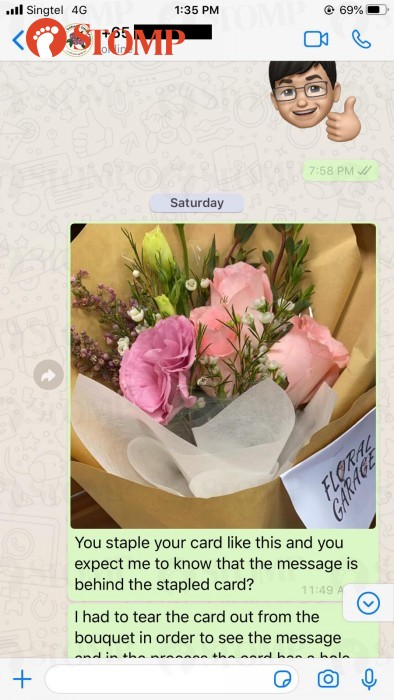 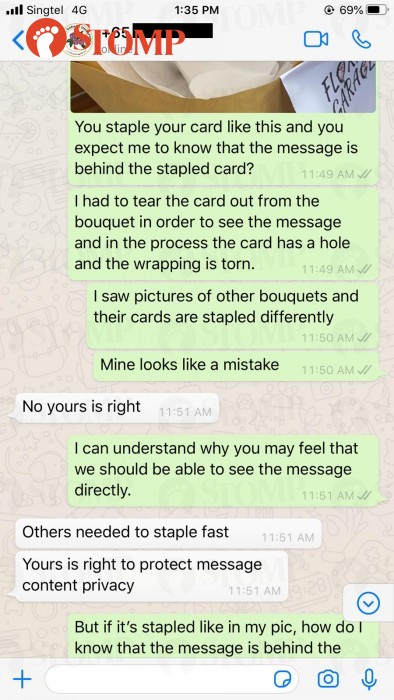 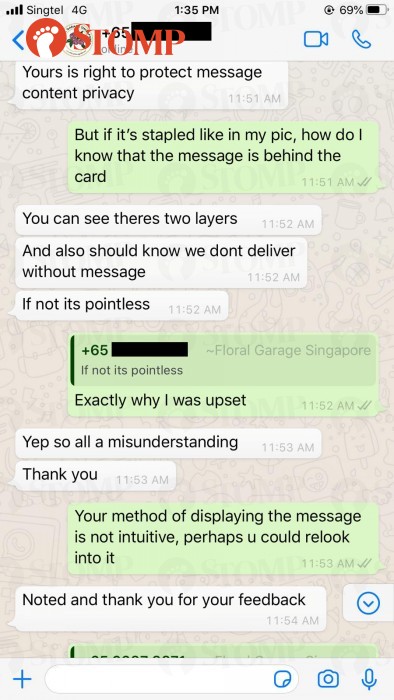 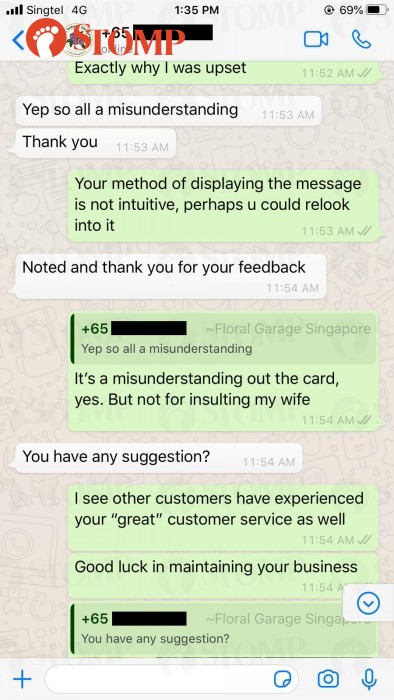 The conversation continued, with Floral Garage eventually calling it a "misunderstanding" and thanking the Stomper for his feedback.

Duckben acknowledged that there was indeed a misunderstanding over the card but not for insulting his wife, to which Floral Garage replied, "You have any suggestion?"

Duckben told Stomp: "I was not happy with their product and I criticised their product. They cannot take feedback, so they scolded my family?

"Also, there were at least 20 comments complaining about Floral Garage on their social media pages over the weekend.

"They have deleted most of these complaints from the comments, but here are some screenshots for your reference." 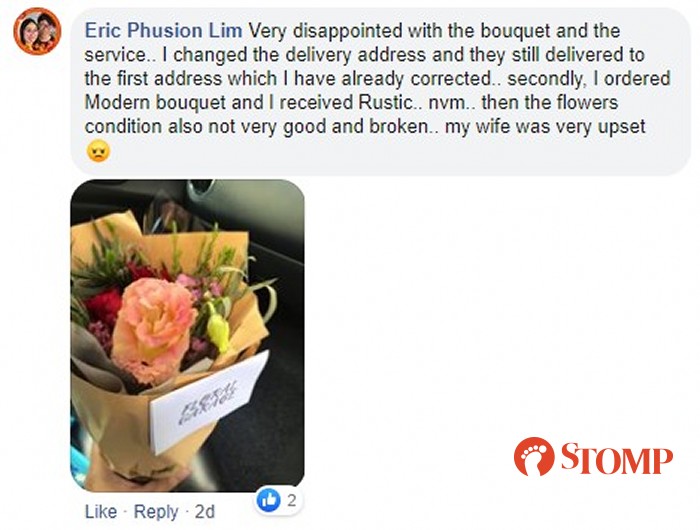 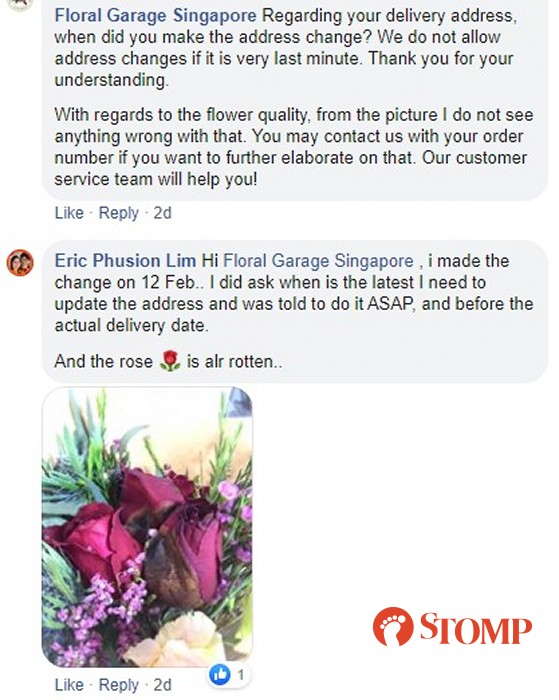 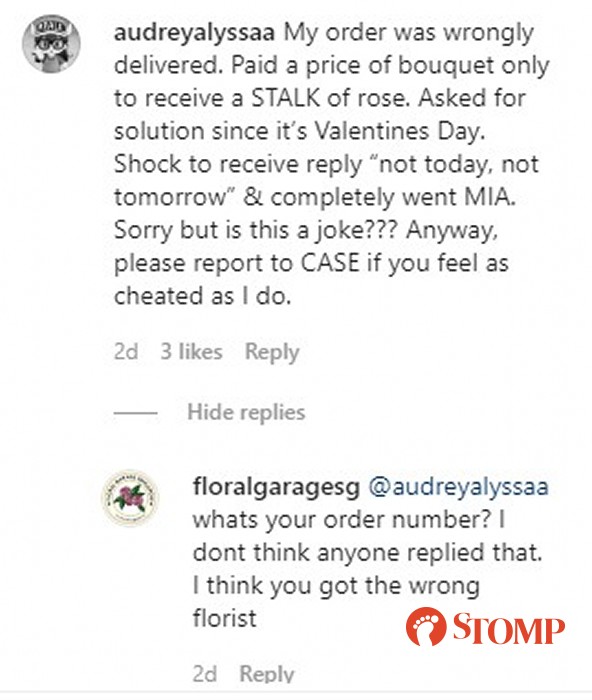 In response to Stomp queries about Duckben's feedback, a spokesman for Floral Garage said it has checked with the employee "who dealt with this conversation".

"With regard to his statement that it looks nothing like the photos, it is not meant to look like any of the photos. Those photos are simply samples of past designs as stated in the product's description on the website.

"As a florist, we design flowers based on colour theme and style, and can never match totally. Even then, this product itself is not meant to be similar to any picture.

"Maybe the customer's issue is with the quantity and beauty of the flowers. You can see that we gave three roses (just like most of the sample images on the website), as well as some fillers and side flowers to complement the main flowers.

"When we do the bouquet, the value of the flowers and fillers is also taken into account. You can see that his fillers look more exotic as we used slightly more unique and thus higher-priced fillers.

'With regard to the beauty, I do not see how this bouquet is ugly. Maybe it simply isn't to the customer's taste. If so, he should have ordered a product that is not 'Freestyle' and not trusted our florist's taste.

"With regard to the card, he did have some difficulty. However, the reason for doing so is to protect the privacy of the message. It was an intentional way of attaching the card. You can see in the screenshots that our staff did explain why we stapled it that way.

"However, we do admit in future we can make the opening of the message more intuitive. We would have to look into how to improve on this.

"With regard to the delivery, the customer had ordered for 9am-5pm delivery, which meant that we could deliver anytime within those times. We delivered right on time.

"Due to the volume of orders on Valentine's Day, we were not able to meet his request, neither did we promise to do so. This applied to all customers.

"With regard to the verbal dispute, in the heat of the moment, both sides lobbed the F-word.

"I would think it is reasonable that our staff would respond in kind as the customer was being rude to him. After all, our staff is also a human being. Hurling such abusive insult at a human being is not right in any circumstance.

"I hope you understand this from a customer service point of view. The staff ultimately was still helpful.

"Just to add on, this customer had been posting blatantly and abusively on our social media platforms. When he posted, he did not include the full story, but only shared screenshots showing the bad parts of the conversation e.g. the F- word.

"I would say he is one of the worst customers we have ever dealt with."