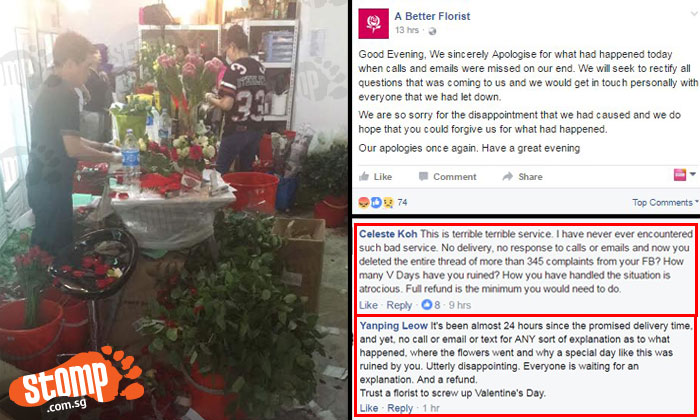 Local florist 'A Better Florist' has come under fire from customers after it apparently failed to deliver flowers on time, failed to respond to order queries and deleting complaints on Facebook made by netizens on Valentine's Day.

Stomper Cheng Qing, who was one of the customers affected, recounted his experience in a Facebook message to Stomp.

He told Stomp that he had placed an order for flowers on Feb 13 for Valentine's Day but as of today (Feb 15), it has not yet been delivered.

He said he has tried contacting the florist via telephone but there was no response. Currently he is still unclear about the status of his order.

"I think the fact that the florist did not even bother to contact me is the most annoying part.

"No news and no explanation given at all."

Stomper Hong also wrote in to share his experience with 'A Better Florist'.

He said that he made an order with them in mid-January for flowers to be sent to his wife on Valentine's Day.

However, the flowers did not arrive.

He told Stomp in an email:

"I started to use their tracking service on Feb 14. I could only see where the car was and no ETA.

"Went to email their support and was given an automatic reply.

"Called their hotline but there was not answer.

"Their phone line still does not go through today (Feb 15)."

The Stomper also sent a photo taken by a customer showing 'A Better Florist' staff putting flowers together.

Based on the photo, Hong feels that the company was understaffed and could not handle the amount of orders made by the customers.

'A Better Florist' has since been bombarded on Facebook with complaints by other customers.

Most of them have have had similar experiences with the two Stompers, and were angry with the company for failing to deliver the flowers and not providing updates about the status of their orders on Valentine's Day.

Some have also said that the florist had deleted earlier complaints on Facebook made by other netizens.

"This is terrible terrible service. I have never ever encountered such bad service.

"No delivery, no response to calls or emails and now you deleted the entire thread of more than 345 complaints from your FB?

"How many V Days have you ruined? How you have handled the situation is atrocious. Full refund is the minimum you would need to do."

'A Better Florist' issued an apology on their Facebook page yesterday evening.

"Good evening, we sincerely apologise for what had happened today when calls and emails were missed on our end.

"We will seek to rectify all questions that was coming to us and we would get in touch personally with everyone that we had let down.

"We are so sorry for the disappointment that we had caused and we do hope that you could forgive us for what had happened.

"Our apologies once again.

"Have a great evening."